Top Posts
A Walk of Faith Begins with a Step...
God is Rich in Mercy
Everyone has a Story to Share
‘Till’ movie: Racial murder helped spark civil rights...
Leaning His Head On Jesus, This Evangelist Hears...
Timing, common ground, and fruitfulness in witness
Step Out of the Traffic
In Support of Ukraine
Living an Imperfect, Unfinished Life
‘Nothing is Impossible’ movie: Hoops, romance, second chances
Home ANS Feature Jailed Iranian Pastor Awaits Appeal Verdict

New Malden, England (ANS) – A verdict on the appeal by Pastor Yousef Nadarkhani and three other members of the Church of Iran denomination will be issued on 11 May, according to Christian Solidarity Worldwide. The four Christians are currently serving ten year prison sentences on charges of ‘acting against national security’ by ‘promoting Zionist Christianity.’ 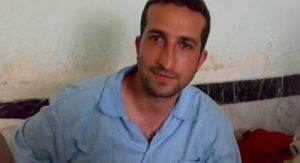 CSW reports that Pastor Nadarkhani, Mohammadreza Omidi, Yasser Mossayebzadeh, and Saheb Fadaie were initially arrested in Rasht on 13 May 2016 during a series of raids by security agents on Christian homes. In July 2017, they were found guilty and sentenced by Judge Ahmadzadeh, head judge of the 26th Branch of the Islamic Revolutionary Court in Tehran, who is accused of overseeing miscarriages of justice, and is subject to financial sanctions in the United Kingdom.

According to CSW the four Christians were released on bail pending an appeal, but were informed on 2 May 2018 that the sentences had been upheld. They were subsequently re-arrested in a series of raids from 22-25 July 2018 and taken to Evin prison to serve their sentences. Pastor Nadarkhani and Mr Omidi have also been sentenced to an additional two years of internal exile, on top of their ten-year sentences.

While a number of Christians and non-Christian prisoners have recently been released from prison, either on a temporary basis or permanently, due to concerns about the spread of COVID-19 in Iran’s prison system, none of these men have been granted furlough.

The verdict on 11 May is expected to be delivered in absentia, as is often the case in trials involving religious minorities in Iran. On 25 February, a five-year prison sentence delivered to another Church of Iran leader, Pastor Matthias Haghnejad, was upheld without a hearing after Iran’s Supreme Leader, Ayatollah Khamanei, reportedly permitted the judge to bypass court procedures.

CSW’s Chief Executive Mervyn Thomas said: “The charges against Pastor Nadarkhani, Mr Omidi, Mr Mossayebzadeh, and Mr Fadaie are excessive, unfounded, and effectively criminalise a faith the country purportedly recognises in its constitution. CSW urges the Iranian authorities to annul these sentences on 11 May, and to ensure that due process is observed in all trials involving religious minorities in Iran.”