Top Posts
Colorado football coach Sanders’ unabashed faith
There’s A Light That Enters Houses With No...
Knowing the One Who Always Keeps His Word
Pregnancy Resource Centers Fight For Life Amidst Opposition
This World is Not Our Home
Lessons Learned From a Gingerbread House
Let There Be Peace on Earth
‘I Wanna Dance’ movie: Whitney Houston’s success and...
Fact Finding, Sight Seeing, and Prayer Walking
Kidney donation led to 8 life-saving surgeries
Home World MissionsPersecution Kidnapped schoolgirl in Nigeria appeals for rescue

In the audio recording obtained by a journalist for Nigerian online news outlet The Cable, kidnapped schoolgirl Leah Sharibu says in her native Hausa that she wants the government and “people of goodwill” to rescue her.

“I am begging you to treat me with compassion, I am calling on the government, particularly, the president, to pity me and get me out of this serious situation,” she says on the audio.

CNN today reported that her father, Sharibu Nathan, confirmed that the voice is that of his daughter.

President Muhammadu Buhari’s spokesman, Garba Shehu, told CNN that intelligence personnel were analyzing the voice recording, and that officials would issue a statement after studying it.

Boko Haram has kidnapped more than 1,000 children in Nigeria since 2013, according to CNN.

About 100 of 276 girls kidnapped by Boko Haram from the town of Chibok, in Borno state, in 2014 are still missing.

Boko Haram, whose name is loosely translated as, “Western education is a sin,” has fought for nine years to impose sharia (Islamic law) on all of Nigeria, killing tens of thousands of people and displacing more than 2 million. Boko Haram militants reportedly warned parents of the returned Dapchi girls not to send their daughters back to school.

In 2015 the Nigerian military began taking back most of the territory Boko Haram had controlled, but many areas remain, and the terrorists are still mounting isolated attacks.

Government analyzing voice that father says is that of his kidnapped schoolgirl daughter.

In the 35-second recording secured by the Nigerian news agency, Ms Sharibu asks “the government and people of goodwill to intervene” to end her plight.  Speaking in Hausa, she urges “members of the public” to assist her parents, younger brother and relatives, and concludes with a plea for compassion: “I am calling on the government and particularly the president to have pity on me and get me out of this serious situation. Thank you.”

Ms Sharibu’s family confirmed to Christian Solidarity Worldwide (Nigeria) that the voice on the tape is hers.

The 15-year-old was the only Christian among 110 school girls who were abducted by the al Barnawi faction of Boko Haram from their school in Dapchi in Yobe state, north east Nigeria, in February 2018.  Following negotiations, the other surviving students were released on March 21, but Ms Sharibu was held in captivity for refusing to convert in exchange for freedom. 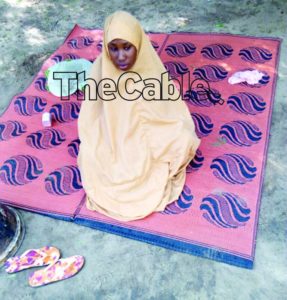 The emergence of the audio and a new photograph of the schoolgirl sitting on a mat in a peach-coloured hijab have given rise to speculation that renewed negotiations for her release may soon be underway.

In July, Aisha Wakil, who is also known as Mama Boko Haram due to her contacts with the sect, confirmed that Ms Sharibu had still not converted, adding that her anti-human trafficking non-governmental organization (NGO), Complete Care and Aid Foundation, was working with the International Committee of the Red Cross (ICRC) to secure her freedom.

In its 22nd report to the United Nations Security Council on July 27, the Analytical Support and Sanctions Monitoring Team stated that the other Dapchi girls had been released “in exchange for a large ransom payment,” citing “Member State information” as its source. However, the Nigerian Minister of Information and Culture continued to insist that no ransom was paid for their release.

CSW’s 200 Hours for 200 Days protest, drawing attention to her plight and amplifying calls for the Nigerian government to negotiate her freedom, will take place between  September  4 and 12. Protesters will take turns standing behind a symbolic solitary school desk in front of the Nigerian High Commission in London and participate in a social media campaign. 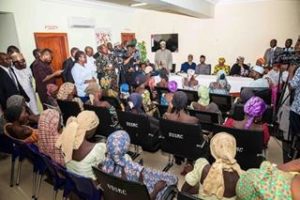 The al Barnawi faction of Boko Haram is also holding three female health workers who were abducted during an attack in Rann, Borno state, in which two humanitarian workers from the International Organisation for Migration (IOM), one from the ICRC and another from UNICEF, were murdered. Alice Loksha Ngaddah, a nurse and mother of two, and midwives Hauwa Mohammed Liman and Saifura Husseini Ahmed, have been held since March 1.  Furthermore, 112 of the girls abducted from their school in Chibok, Borno state by the terrorist faction led by Abubakar Shekau in April 2014 are still unaccounted for.

CSW’s Chief Executive Mervyn Thomas said: “Hearing this remarkable young girl speaking in a mature and steady manner after being held captive for seven months by one of the most brutal terrorist organisations in the world is testament to the strength of her faith and character. It is also poignant to note that despite her appalling plight, the wellbeing of her family remains uppermost in her mind. We call on the Nigerian government to expedite Leah Sharibu’s release and to secure the release of the female health workers and the remaining Chibok girls as a matter of urgency.  We also urge the Nigerian government to uphold the right of every child to freedom of religion or belief and to education, and to take all necessary measures to safeguard women and girls from abduction.”

‘Loaves and Fishes’ Appeal Made to Help in Kerala Flooding