Top Posts
Water and the Word, for Life, In Jesus’...
Voiceless Mass: Raven Chacon Wins the Pulitzer
Bob Dylan Center Now Open
Finding Rest for Our Weary Souls
This Much He Knows to Be True: Nick...
Fact Finding, Sightseeing, and Prayer Walking
My Rushmore: Pocahontas, Dock, Sauer, and Bustill
Living Life on Purpose for God’s Kingdom
Leadership for Life
How God Transformed a Community
Home ANS Feature Loving at all Costs in the Battle of Mosul

Loving at all Costs in the Battle of Mosul

Mosul, Iraq (ANS) – Former member of U.S. Army Special Forces David Eubank is seeking to inspire people to love others at all costs, following the lessons he learned from one of his most challenging ever missions to Mosul in Iraq.

Author David Eubank, along with Hosannah Valentine, gives us the compelling true story of learning the difference between justice and revenge and loving others at all costs, with his new book Do This for Love; Free Burma Rangers in the Battle of Mosul. From Burma to Sudan and Iraq to Syria, the Free Burma Rangers have given help, hope and love to people under attack. 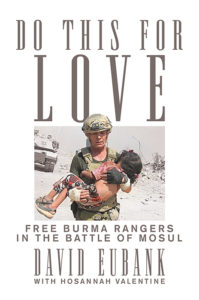 The fiercest urban battle in recent history, to retake the city of Mosul from ISIS, lasted nine months. Thousands were killed, millions displaced. How to help in such a massive and desperate situation? Eubank, a former member of U.S. Army Special Forces and a Ranger officer, is the founder of the Free Burma Rangers (FBR), which is a multi-ethnic and faith relief organization. He and his family share the love of Jesus in Burma, Iraq, Kurdistan, Syria and Sudan by giving help, hope and love while shining a light on the situations of the people in these troubled areas.

As coalition forces, led by brave Iraqi soldiers on the ground, slowly pushed ISIS out, the brutality of the terrorists was turned against thousands of civilians as they fled the fighting. There was no humanitarian template for responding to such ruthlessness; to attempt to help would take total commitment.

Birthed in the war zones of Burma to stand with villagers under attack by the Burma Army and provide medical care, relief, and reporting, the Free Burma Rangers came to Mosul with 20 years of war zone experience in the jungle. Led by Eubank, medics, cameramen from the teams in Burma, other foreign volunteers, and David’s wife and three children, they came to fill the gap between the frontlines and the humanitarian community. They came living by the conviction that every person counts and the only force that can defeat hate is love. Four team members were wounded and one killed as they lived out that conviction with total commitment. This is their story of praying with faith, acting with courage and never surrendering.

In an interview with the Global News Alliance Eubank explains:

“I remember looking out on the planes of Nineveh, which is where Mosul is and seeing the black flag of ISIS and then praying and saying ‘God what am I doing here? I believe you brought me here, but we’re jungle people.  I speak those languages, we walk everywhere. ‘We’re now in Iraq which is an Arab, Kurdish, Muslim region, desert.  And I really felt God say to me ‘give up your own way, give up the Free Burma Ranger way and just come help these people.’ And we came first with the Kurds. And then after ISIS was expelled from those areas, by 2016 we went into the battle of Mosul and started working with the Iraqi army which was a great blessing. I learned to love the Iraqis, that’s a huge gift.”

Eubank remembers one of the most powerful moments of their mission which received wide spread media coverage when he rescued an Iraqi girl while coming under intense fire in June 2017. 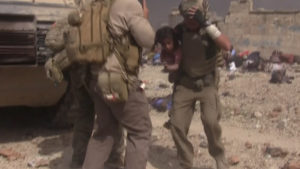 “I ran out saying ‘Jesus help me. I grabbed her.  I had to yank her off her dead mother.  She was terrified, because who am I? All she’s seen is people trying to kill her. And I ran back and using the tank as cover we got out.  And made it back to where my wife was waiting and cradling the girl and my daughter was helping treat casualties. And that was a wonderful moment where we could be part of something good.”

Eubank concludes by sharing what he hopes people will take away from his book.

You can see a video report on David Eubank’s story produced by our partners at the Global News Alliance here:

Loving At All Costs Through the Battle For Mosul