Top Posts
Knowing the One Who Always Keeps His Word
Pregnancy Resource Centers Fight For Life Amidst Opposition
This World is Not Our Home
Lessons Learned From a Gingerbread House
Let There Be Peace on Earth
‘I Wanna Dance’ movie: Whitney Houston’s success and...
Fact Finding, Sight Seeing, and Prayer Walking
Kidney donation led to 8 life-saving surgeries
The Power of Curiosity
When Love Came Down at Christmas
Home ANS Feature Luis Palau’s ‘FestiMadrid’ Reaches Thousands

MADRID, SPAIN (ANS) — Hundreds of thousands of people were reached with the Good News of Jesus Christ through multiple live events and extensive media broadcasts as part of Luis Palau’s ‘FestiMadrid.’

In a nation where less than 2% of the population claims to be evangelical, this festival was no easy task, said Andrew Palau in a ministry update for supporters.

www.NRB.org  reported that at the invitation of hundreds of churches and thousands of Christians in Spain, the Luis Palau Association shared the Good News of Jesus Christ in Madrid, June 15-23, through numerous outreach events and a two-day family festival in the heart of the city. 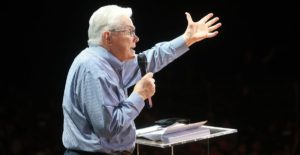 NRB.org stated that working with, through, and for the local Church, the unified, area-wide campaign proclaimed the life-changing message of Jesus Christ on a nationwide scale and introduced a new model for long-term community change. The campaign united believers in Madrid as well as local pastors and leaders, encouraging them in the Word, focusing on continuing in unity, and inspiring them to keep evangelism a top priority.

“The region-wide effort brought together more than 200 churches and trained 3,700 local followers of Christ – all focused on a week-long campaign to saturate the city and surrounding region with the Gospel,” the Palau Association reported.

“We’re praising God for the great harvest in Madrid this month, and we are joyfully expectant for the work He will continue to do through the unity, partnership, and excitement initiated by this campaign,” the organization added.

NRB.org said that for years, God has used the Palau team to bless Spain.


Fourteen years ago, the 2005 Madrid festival sparked a powerful new season of outreach and evangelism for evangelical churches in the city and surrounding area, and helped ignite a significant church planting movement that has been bearing much fruit.

According to the Palau Association, evangelical leaders were eager to have it partner on another festival to grow the Gospel’s impact even further. 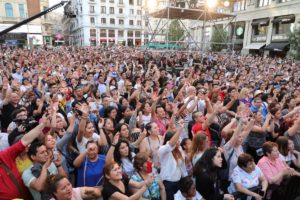 Some of the thousands who attended FestiMadrid

Through Palau’s unique partnership among churches, as well as corporate and civic leaders, this month’s Madrid campaign included:

“Our strategy built upon Andrew Palau’s most recent work in Europe and four committed decades from Luis and the team,” the ministry reported, referring to its lead evangelist and the son of its founder, Luis Palau. “God-willing, this campaign will continue to bring encouragement, unity, and hope to the people of Spain for years to come.”

NRB.org said that for the Madrid festival, Palau was joined by his father, marking that the latter’s first international trip since he was diagnosed with Stage IV lung cancer in January 2018.

Earlier this month, Luis Palau released his latest book, Palau: A Life on Fire, which he started working in the weeks after his cancer diagnosis. The book is a very personal, intimate look at the elder Palau’s life and ministry, with a focus on the unsung heroes in his life.

Andrew Palau added: “Sharing the Gospel is a community effort.  And you played a vital role!  Through your prayers, giving, support, and encouragement, you helped make this Madrid Festival possible.

“Because of you, thousands of people have found new hope in Jesus Christ.  Through this effort, they found peace, forgiveness, joy, and the assurance of salvation.  Thank you for your partnership in sharing the Gospel in Madrid!”