Top Posts
Knowing the One Who Always Keeps His Word
Pregnancy Resource Centers Fight For Life Amidst Opposition
This World is Not Our Home
Lessons Learned From a Gingerbread House
Let There Be Peace on Earth
‘I Wanna Dance’ movie: Whitney Houston’s success and...
Fact Finding, Sight Seeing, and Prayer Walking
Kidney donation led to 8 life-saving surgeries
The Power of Curiosity
When Love Came Down at Christmas
Home World MissionsPersecution Miraculously delivered by God, unable to read Bible

McLEAN, VIRGINIA (ANS) — Northern Nigeria is a dangerous place for Christians – especially for those who have left Islam to follow Christ.

But BarnabasAid says God intervened in power to save 72 converts and their children from Boko Haram militants. 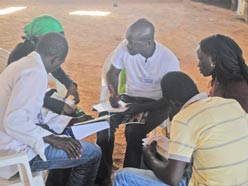 According to BarnabasAid, these believers excel in courageous faith, they have met Christ face-to-face and heard Him speak, they have experienced His miraculous deliverance.

They cannot build themselves up by daily study of His Word — because they cannot read. Or they do not have a New Testament.

Their story begins with a group of 500 Nigerian Christian converts from Islam and their children.

It is not normal for this tribe to gather in such large numbers, but all of them had already been attacked by Boko Haram Islamist militants and they hoped that a larger group would give them a measure of security.

Boko Haram were not deterred. They attacked the group and captured 76, taking them back to their camp.

At the Boko Haram camp, the Christians were tortured, and their four male leaders were told they must deny Christ and return to Islam or they would be shot.

The four refused and were duly shot dead, in full view of the rest of the group.

A week later the four widows of the dead men were told they must renounce their Christian faith or their children would be shot. They were given time to think over this dreadful choice.

As they agonized together that evening, their excited children came running in, telling their mothers that Jesus had appeared to them and told them all would be well.

Jesus then appeared to the whole group of 72, and told them not to fear for He would protect them. He said they should not renounce Him but should stay strong, and that He was the Way, the Truth and the Life.

The next day, the four mothers gave their decision to the militants – they would not deny Christ.

The militants prepared to shoot the children, who were already lined up against a wall. The youngest was a little girl of four. Suddenly the militants began screaming and clawing at their own heads. Shouting “Snakes!” they fled the scene, and some of them dropped dead.

One of the Christian men reached for the gun of a dead militant but the four-year-old put her hand on his arm to stop him. “You don’t need to do that,” she said, “Can’t you see the men in white fighting for us?

Barnabas Aid is supporting a grass-roots literacy program to help the many members of this nomadic tribe who have not had any education.