Top Posts
Pregnancy Resource Centers Fight For Life Amidst Opposition
This World is Not Our Home
Lessons Learned From a Gingerbread House
Let There Be Peace on Earth
‘I Wanna Dance’ movie: Whitney Houston’s success and...
Fact Finding, Sight Seeing, and Prayer Walking
Kidney donation led to 8 life-saving surgeries
The Power of Curiosity
When Love Came Down at Christmas
A Walk of Faith Begins with a Step...
Home Tags Posts tagged with "Nigerian Christians"

JOS, Nigeria (ANS) — Muslim Fulani herdsmen killed a young Christian man after stopping him on a highway in Kaduna state on Oct. 5, while in Plateau state another 13 Christians have been slain in less than a month, sources said.

Morning Star News reports armed herdsmen stopped the vehicle of Bartholomew David, 23, and a female passenger shortly after he had dropped his sister off at the Akilbu railway station, about 70 kilometers (43 miles) from the city of Kaduna on the highway to Abuja. They took David and the woman, who had requested a ride from him to the Akilbu station, into the wilderness, Akilbu resident Enoch Barde told Morning Star News. 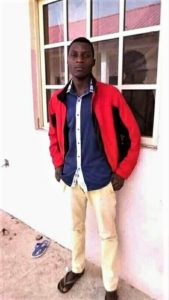 Bartholomew David was killed by Muslim Fulani herdsmen on Oct. 5, 2019.

“As he was coming back he gave a lady a lift to Akilbu, and on their way the kidnappers stopped them, took them inside the bush and shot him to death, and the girl ran,” Barde said, citing information he learned from the young woman. “The girl said the herdsmen kidnapped them because they were Christians. She told the police the same thing.”

The woman, whose name is undisclosed for security reasons, and David are of the Adara ethnic group in Kaduna state. Barde added that kidnapping of Christians in the area has become rampant as the Fulani herdsmen are Muslims while the native groups of the Adara tribe are mostly Christians.

“In most cases, only a few women or girls who are lucky usually escape from the rampaging kidnappers,” he said. “And at times, the kidnappers will rape the women and girls before letting them go.”

David, a 2017 graduate of Federal College of Education, Minna, was a member of the Evangelical Church Winning All (ECWA) in Akilbu.

“He was a member of the youth fellowship of the church,” Barde said.

In Plateau state, Muslim Fulani herdsmen killed 13 Christians in less than a month, including three slain on Oct. 7, sources said.

“The three were working on a farm, harvesting tomatoes, when the herdsmen attacked and killed them in the evening,” Dalyop said.

A member of Nigeria’s National Assembly, Simon Mwadkon, called the killings in Vatt “ungodly, barbaric and a sacrilege” in a press statement from Jos.

“It does appear simply that some people are determined to undermine all efforts to restore peace in our communities,” Mwadkon said.

Lawrence Zango, a spokesman for area Christian communities, confirmed the attacks, saying such assaults have continued unabated in spite of efforts to persuade the Nigerian government to address the violence.

“Our communities have been attacked by armed Fulanis in the past three years without end,” Zango said. “All efforts to call the attention of the Nigeria government to these attacks are futile, as no effort has been made to end them.”

At a recent funeral for slain Christians, the Rev. Joshua Bari, chairman of the Christian Association of Nigeria (CAN) in the area, expressed his dismay at the government’s inaction.

“We consider this to be purely an impudent act, and in fact a degrading treatment being done on Christians to stop us from preaching the message of peace,” Pastor Bari said. “We therefore plead and urge the government of Nigeria to come to our rescue by putting a stop to these killings, knowing fully that the sole duty of the state is to protect lives and properties. When this is not done it shows that the state has failed.”

He called on Christian organizations, individual Christians, Non-Government Organizations and the government to support the families of the deceased prayerfully and financially to help alleviate their sufferings.

Nigeria ranked 12th on Christian support organization Open Doors’ 2019 World Watch List of the countries where it is most difficult to be a Christian.