Top Posts
There’s A Light That Enters Houses With No...
Knowing the One Who Always Keeps His Word
Pregnancy Resource Centers Fight For Life Amidst Opposition
This World is Not Our Home
Lessons Learned From a Gingerbread House
Let There Be Peace on Earth
‘I Wanna Dance’ movie: Whitney Houston’s success and...
Fact Finding, Sight Seeing, and Prayer Walking
Kidney donation led to 8 life-saving surgeries
The Power of Curiosity
Home World MissionsPersecution Militia Attack kills nine in Nigeria

According to survivors, speaking with Christian Solidarity Worldwide, the attack on the Nandu Gbok community in Sanga Local Government Area (LGA) began at around 4:00am. Victims included women and children. 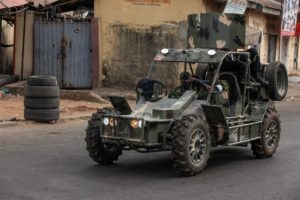 A military vehicle patrols the streets of Kaduna

The attack follows a series of militia raids on Kajuru LGA in southern Kaduna that have claimed at least 120 lives since February 9, 2019.  The raids occurred in the wake of a televised statement by Kaduna state Governor Nasir el Rufai on the eve of February’s postponed presidential and national assembly elections, in which he alleged that 66 people had been killed in Kajuru LGA and insinuated the victims were mostly women and children from the Fulani ethnic group.

In an audio recording sent to CSW following an attack on March 11 in which 52 people were killed, the daughter of a victim is informed by one of the assailants who had killed her father that the attacks were occurring because the Kajuru community had allegedly murdered Fulani women and children. The assailant went on to say the killings were just the beginning, that worse was to follow and that the Adara people should vacate their land.

In a statement issued on March 16, Hon Shehu Nicholas Garba, Representative for Jema’a/Sanga in Nigeria’s House of Representatives, called for an urgent local and international response to the continuing violence:  “The renewed and ferocious attacks on communities in southern Kaduna calls for the urgent attention of the nation and the international community. Our communities are helpless and are pleading that all persons of conscience should speak out.”

The Kaduna state government condemned the attack on the Nandu Gbok community, expressing condolences to victims and deploying troops to the area.

Elsewhere, on March 14 the Gwer West Local Government Council in Benue state issued a chronology of attacks by Fulani militia in the area since January 21, along with a list of 30 victims. The report details seven separate attacks on villages in Benue, three of which took place on March 2.

Meanwhile in Zamfara state, credible observers note a growing terrorist element to the banditry that has devastated the area and claimed thousands of lives. More than 100 people were killed and a similar number abducted within a seven-day period that commenced with an attack on Kawaye village in Bagega, Anka LGA on February 27. The spree of violence was allegedly in retaliation for the alleged killing of members of the Fulani militia. March began with an attack on Garin Kwari in Shinkafi LGA claimed 40 lives. On March 11, armed bandits invaded a Jumma’a Mosque in Dumama village, Zurmi LGA, and opened fire on worshippers, killing more than 20.

On March 12, the army reported that 55 suspected bandits had been killed and 760 abductees released between February 15 and March 11 in an operation that also claimed the lives of three soldiers and several members of the Civilian Joint Task Force (CJTF).

Other recent attacks include:

On January 21, four people died in an attack on the Tse Abe Community in Gbaange/Tongov ward.

On March 2, six people were killed in an attack on Tse Tema Dura in Mbachohon ward.

On March 2, one person died in an attack on the Tse Sereki Community in the Mbachohon ward.

On March 2, seven people were killed in an attack on the Tse Ugoor Community in Mbachohon ward.

On March 3, two people died during an attack on Tse Nongu Community in Saghev/Ukusu ward.

On March 7, six people died during an attack on Tse Lumun and Tse Gesa in Mbapupuu Gaambe-Ushin ward.

On March 10, four people died during an attack on the Tse Agagbe Community.

CSW’s Mervyn Thomas said:  “Once again, we extend our deepest condolences to those who have lost loved ones in the violence in Kaduna, Benue and Zamfara states. We commend the recent successes of the armed forces in Zamfara, and urge that troops deployed in central Nigeria would be similarly proactive in tackling militia violence in southern Kaduna, Benue and elsewhere.

“It is clear that the culture of impunity that surrounds these attacks has emboldened perpetrators. We reiterate our call on state and the federal governments to address every source of violence in a swift, decisive and unbiased manner, ensuring that vulnerable communities are provided the protection they so desperately need. We further call on the international community to do everything in its power to assist and equip Nigeria to address violence by every armed faction in a decisive manner, wherever and whenever it occurs.”