Top Posts
Knowing the One Who Always Keeps His Word
Pregnancy Resource Centers Fight For Life Amidst Opposition
This World is Not Our Home
Lessons Learned From a Gingerbread House
Let There Be Peace on Earth
‘I Wanna Dance’ movie: Whitney Houston’s success and...
Fact Finding, Sight Seeing, and Prayer Walking
Kidney donation led to 8 life-saving surgeries
The Power of Curiosity
When Love Came Down at Christmas
Home ANS Feature Re-direct Christmas Spending to End Abject Poverty

WILLS POINT, Texas (ANS) – Half of the world’s poor live in just five countries–India, Bangladesh, Nigeria, Democratic Republic of the Congo, and Ethiopia–according to World Bank, an international banking organization.

Those categorized as the “extreme poor”–about 736 million people–live on less than $1.90 per day. 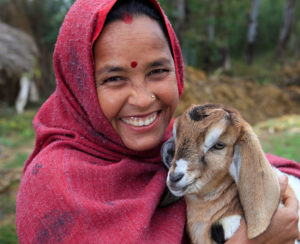 This woman was blessed by the gift of a goat from Heifer International, helping lift her out of poverty.

Faith-based mission agency Gospel for Asia (GFA, www.gfa.org ) – on the frontlines in the fight against poverty — has released a new report declaring extreme poverty “public enemy number one,” and challenging people everywhere to help eradicate it.

The release of the report – titled Poverty: Public Enemy #1: Eliminating Extreme Poverty Worldwide is Possible, But Not Inevitable – coincided with the United Nations’ International Day for the Eradication of Poverty on Oct. 17, an annual event that spotlights poverty’s crippling impact.

For the full report, go to: https://www.gfa.org/press/poverty-report.

“Extreme poverty is the ruthless enemy that lurks in cities and villages across Asia and around the world, stealing millions of children’s lives every year,” said GFA founder Dr. K.P. Yohannan, whose Texas-based nonprofit organization has helped millions of  Asia’s poorest people over the past four decades.

According to the report, poverty’s tsunami of devastation includes:

** Globally, every year, 2.7 million newborns–equal to the population of Chicago–who die from poverty-related health and nutrition issues in the first month of life

** Almost 3 billion people who do not have toilets, and nearly 1 billion who lack safe drinking water

To end extreme cycles of poverty worldwide, it would cost less than one-third of how much Americans annually spend on Christmas, GFA’s report says, citing economist Jeffrey Sachs.

While the eradication of extreme poverty in parts of the developing world by 2030 is “ambitious, yet achievable,” according to World Bank, the task is far more difficult in conflict-torn regions and areas impacted by natural disasters.

It Starts With One 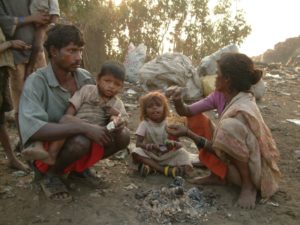 “Eliminating severe poverty really starts with one person saying: ‘I’m going to make a difference and help one person in poverty’,” said Yohannan. “That one person can be you or me. We really can help end extreme poverty in this generation.”

Celebrating its 40th anniversary in 2019, Gospel for Asia (GFA, www.gfa.org ) is a leading faith-based mission agency, bringing vital assistance and spiritual hope to millions across Asia, especially to those who have yet to hear the “good news” of Jesus Christ.