Top Posts
Knowing the One Who Always Keeps His Word
Pregnancy Resource Centers Fight For Life Amidst Opposition
This World is Not Our Home
Lessons Learned From a Gingerbread House
Let There Be Peace on Earth
‘I Wanna Dance’ movie: Whitney Houston’s success and...
Fact Finding, Sight Seeing, and Prayer Walking
Kidney donation led to 8 life-saving surgeries
The Power of Curiosity
When Love Came Down at Christmas
Home ANS Feature Mother Teresa — The Saint and Her Nation

EDGBASTON, BIRMINGHAM, United Kingdom (ANS) — A personality of Mother Teresa’s calibre and global reach does not come about by chance.

Focusing on her traumas, ordeals and achievements as a private individual and a public missionary, and her complex spirituality, a new book, Mother Teresa — The Saint and Her Nation,  contends that Mother Teresa’s life and her nation’s history, especially her countrymen’s relationship with Roman Catholicism, are interconnected. 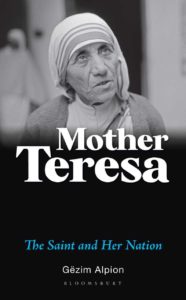 Cover artwork for Mother Teresa – The Saint and Her Nation

To provide a well-rounded portrait of this influential figure, this book approaches her in the context of her familial background and ethnic, cultural and spiritual milieus. Her life and work are explored in the light of newly-discovered information about her family, the Albanian nation’s spiritual tradition before and after the advent of Christianity, and the impact of the Vatican and other influential powers on her people since the early Middle Ages.

Author Gëzim Alpion says that unravelling this interconnectedness is essential to understanding how this modern spiritual and humanitarian icon has come to epitomise her ancient nation’s cultural and spiritual DNA.

Gëzim’s specializations encompass the sociology of religion, nationalism, fame, race, media, film and authorship. He is considered “the most authoritative English-language author’ on St Teresa of Calcutta and ‘the founder of Mother Teresa Studies.”

In his recent publications Gëzim has explored the concept of charism/a from a sociological and public theology perspective, Enoch Powell’s populist rhetoric in the context of the eugenics discourse, and the reasons for the absence of modern spiritual icons in celebrity studies.

Gëzim is currently developing the idea of ‘fame capital’ as a variable in an intranational and international context, examining ‘The Dark Night of the Soul’ phenomenon from a sociological perspective, and exploring the role of religion in fabricating national identity.

Gezim will have a chance to speak briefly on this book at the “Religion as an Instrument for Peace” Conference hosted by the President of Albania Ilir Meta in coordination with the U.S. State Department in Tirana from 18-19 November.

“The event will bring together heads of states, religious leaders and scholars of religion from Western Balkans and beyond,” he said.

Gezim told ASSIST News: “I received a personal invitation from the president a couple of weeks ago. I am glad they are organising this event in view of the history of the region. At the conference, I will speak on Mother Teresa’s role as a messenger of peace.”

Encounters with Civilizations: From Alexander the Great to Mother Teresa, London and New York: Routledge, 2017. http://amzn.to/2A7BAMi