Top Posts
Pregnancy Resource Centers Fight For Life Amidst Opposition
This World is Not Our Home
Lessons Learned From a Gingerbread House
Let There Be Peace on Earth
‘I Wanna Dance’ movie: Whitney Houston’s success and...
Fact Finding, Sight Seeing, and Prayer Walking
Kidney donation led to 8 life-saving surgeries
The Power of Curiosity
When Love Came Down at Christmas
A Walk of Faith Begins with a Step...
Home Tags Posts tagged with "Mother Teresa"

BIRMINGHAM, UK (ANS) — A personality of Mother Teresa’s caliber and global reach does not come about by chance.

To provide a well-rounded portrait of this influential figure, Mother Teresa – The Saint and Her Nation approaches her in the context of her familial background and ethnic, cultural and spiritual milieus. 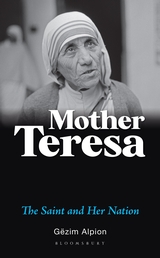 Cover Artwork for Mother Teresa – The Saint and Her Nation

Mother Teresa’s life and work are explored in the light of newly-discovered information about her family, the Albanian nation’s spiritual tradition before and after the advent of Christianity, and the impact of the Vatican and other influential powers on her people since the early Middle Ages.

Focusing on her traumas, ordeals and achievements as a private individual and a public missionary, and her complex spirituality, this book contends that Mother Teresa’s life and her nation’s history, especially her countrymen’s relationship with Roman Catholicism, are interconnected.

Unravelling this interconnectedness is essential to understanding how this modern spiritual and humanitarian icon has come to epitomize her ancient nation’s cultural and spiritual DNA.

“This book is part of my ongoing research project that started twenty years ago, where I explore the significance of religion through the role and impact of spiritual personalities on our lives, employing Mother Teresa as a case study,” Alpion told Assist News Service.

Since the publication of his first academic study on Mother Teresa in 2004, Alpion has continuously highlighted the need to root this complex figure into her indigenous background. Initially, he explored this theme, as never before in Mother Teresa literature, in the 2007 Routledge book Mother Teresa: Saint or Celebrity?

“In Mother Teresa: The Saint and Her Nation, I pay attention for the first time to her paternal and maternal ancestors, focusing on their ethno-spiritual identity as Albanian Christians. In this book, I contend that a spiritual personality of Mother Teresa’s calibre is not and cannot be an accident. Equally important, Mother Teresa’s vocation and the nature of her ministry reflect features of a spiritual tradition that goes back to her Albanian nation’s Pelago-Illyrian roots.”

Alpion says Mother Teresa is the latest illustrious Albanian-born spiritual personality to have served and enriched the Christian faith with exemplary devotion since its inception, a devotion which began in her native Skopje, one of the most ancient centres of Christianity in Europe.

“Completing Mother Teresa: The Saint and Her Nation was important for me to start working on my next monograph Can Humans Know God? – Mother Teresa’s Conundrum where I explore Mother Teresa’s dark night of the soul from a sociological perspective,” he said.

Alpion’s interest in Mother Teresa’s roots began initially in the early 2000s. One of the most important sources he used to write Mother Teresa: The Saint and Her Nation was the information from Filomena, Mother Teresa’s cousin and adopted sister who he discovered by chance when he went to Australia to give a talk in 2011.

Alpion explained: “It appears most of Mother Teresa biographers since Malcolm Muggeridge in the early 1970s onwards have known about, met with and even been guests to Filomena’s house in Melbourne. And yet, none of them has considered her worthy of their interest, not even mentioning her on a footnote. Filomena passed away in 1979. I am grateful to Filomena’s daughter and her two granddaughters who spoke to me exclusively in 2011 and 2013 sharing with me their memories of Filomena and Mother Teresa and the family archive. I am delighted and relieved that Filomena’s story and her unique relationship with Mother Teresa, at long last will be preserved for posterity.”

According to Alpion, Mother Teresa: The Saint and Her Nation is first and foremost a scholarly work.

“As such, this monograph is of interest mainly to researchers focusing on the sociology of religion, the interaction between faith and national identity, the politics of the Vatican in South East Europe and beyond, the role of religion in post-modernity, as well as to migration, missiology and gender studies scholars. The book will be of interest also to the general reader. In this work, I use a style, which I employ in all my academic writings, that does not put off readers who are not interested in social sciences per se but enjoy reading scholarly books on areas of personal interest,” he said.

He concluded: “Like my previous writings on the saintly nun, I hope Mother Teresa: The Saint and her Nation will enable scholars and the general reader to see her as a more down-to-worth spiritual personality. I also hope this book will help readers to see more clearly as never before the reasons why Mother Teresa was interested especially in the abandoned and the dying, her staunch belief in the sanctity of human dignity, and what kept her going in spite of being gnawed by spiritual darkness throughout her 69-year-long mission perhaps like no other mystic in the history of the Church.”