Top Posts
Johnny Cash movie: His life, loves, challenges and...
A Walk of Faith Begins with a Step...
God is Rich in Mercy
Everyone has a Story to Share
‘Till’ movie: Racial murder helped spark civil rights...
Leaning His Head On Jesus, This Evangelist Hears...
Timing, common ground, and fruitfulness in witness
Step Out of the Traffic
In Support of Ukraine
Living an Imperfect, Unfinished Life
Home ANS Feature Mother Teresa author gets Albanian Nation’s Ambassador Award

LONDON, UNITED KINGDOM (ANS) — A Mother Teresa of Calcutta research scholar in the United Kingdom was honoured with a prestigious award from Albanian government in London on 2nd October 2019.

Matters India (http://mattersindia.com) reports the Ambassador of Albania to the UK, His Excellency Qirjako Qirko, handed over the Albanian Nation’s Ambassador Award, bestowed by the Prime Minister of Albania Edi Rama and the Minister of State for Diaspora Pandeli Majko, to Mother Teresa author Dr Gëzim Alpion of the University of Birmingham.

Mother Teresa was born as Gonxhe Agnes Bojaxhiu to ethnic Albanian parents in Skopje, Macedonia, on August 26, 1910. At 18, she left home and joined the Sisters of Loreto in Ireland and arrived in India on 6 January 1929. 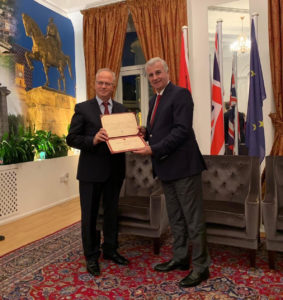 Ambassador Qirko told Matters India that the reasons for conferring the award include: “Professor Alpion’s 20 years of scholarly dedication to Mother Teresa’s life, work and legacy; his lobbying for the canonization of Mother Teresa from 2014 to 2016; and his ongoing lobbying for the construction of the Arbëri Highway, which will shorten considerably the distance between Skopje, Mother Teresa’s birthplace, and Tirana, and will benefit Albania, as well as Macedonia, Kosova and Bulgaria. Professor Alpion’s contribution in this respect is valued by the Government of Albania.”

The Ambassador added, “Alpion has always been constructive and professional throughout the lobbying campaign. Work has already started on the construction of the Arbëri Highway, which will be completed in a couple of years.”

Dr Alpion’s main academic publications on the saint of the gutters in Calcutta include Mother Teresa: Saint or Celebrity? (Routledge, 2007; Routledge India, 2008; Salerno Editrice, 2008), and Encounters with Civilizations: From Alexander the Great to Mother Teresa (Routledge, 2017). His eagerly awaited monograph Mother Teresa: The Saint and Her Nation will be published by Bloomsbury Academic in 2020.

Alpion is considered ‘the most authoritative English-language author’ on Mother Teresa and the ‘founder of Mother Teresa Studies’. In recent years, he has delivered over 50 keynote addresses, talks and lectures at international conferences and renowned universities in 15 countries.