Top Posts
Knowing the One Who Always Keeps His Word
Pregnancy Resource Centers Fight For Life Amidst Opposition
This World is Not Our Home
Lessons Learned From a Gingerbread House
Let There Be Peace on Earth
‘I Wanna Dance’ movie: Whitney Houston’s success and...
Fact Finding, Sight Seeing, and Prayer Walking
Kidney donation led to 8 life-saving surgeries
The Power of Curiosity
When Love Came Down at Christmas
Home ANS Reports Rick Warren Hospitalized

LAKE FOREST, CA (ANS – Nov. 10, 2018) — Rick Warren, the best-selling author and pastor of one of the largest churches in the country, has been hospitalized and undergone emergency surgery successfully.

News of Rick Warren’s condition broke after his wife, Kay Warren, was forced to pull out of a speaking engagement in Northern Ireland and return to her husband’s side. 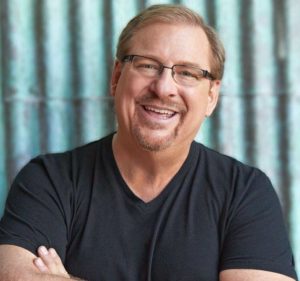 Warren, the author of “A Purpose Driven Life,” has had to undergo “immediate surgery” for an “intestinal condition,” according to www.faithwire.com

Kay, a leading mental health advocate and well-known public speaker, was due to be the special guest at the “Illuminate” conference in Coleraine, on the north coast of Northern Ireland, before having to pull out. According to the note, Warren heard the concerning news about her husband while “in the air and just a few hours from arrival.”

Encouragingly, the announcement noted that Rick is “expected to recover” from the operation, though it did not give any further details on his current condition, other than confirming that Kay would be “immediately returning to the United States to be with her family.”

“Please keep Rick, Kay and their family in your prayers,” the post continued.

Following the staggering success of “A Purpose Driven Life,” which sold over 30 million copies in the five years after its release, Warren decided not to take a salary from his enormously influential church, Saddleback. To give you an idea of Saddleback’s size, in 2017, weekly attendance averaged at around 22,000.

“I’ve been a volunteer Pastor for the last 10 years now,” Warren said of his humble lifestyle, according to Forbes. “I’m not a professional Pastor, I’m an amateur.”

In his almost four decades of ministry, Rick and Kay have devoted themselves to giving away as much money as possible to those who are in need. They have truly practiced what they preach. “When we got married, we began tithing 10%. Each year we would raise our tithe 1% to stretch our faith: 11% the first year, 12% the second year, 13% the third year,” Rick previously explained, according to BeliefNet.

“I gave it all back because I didn’t want anyone to think that I do what I do because of money. I love Jesus Christ,” he said.

The Saddleback Church told Charisma News Warren’s surgery went well and he is out now and is expected to fully recover.

Please pray for the entire Warren family as Pastor Rick recovers from his surgery.

Rick and Kay Warren have been instrumental in raising awareness of suicide in the Christian community.

Last year, more than 45,000 families heard the devastating news that their loved one died by suicide, leaving them in great need of comfort, hope and healing.

On Saturday, November 17, 2018, Saddleback Church and the American Foundation for Suicide Prevention will co-host an event in honor of International Survivors of Suicide Loss Day. This event is for all who have lost someone to suicide, whether the loss is recent or in the past.

Kay Warren, cofounder of Saddleback Church, and AFSP will be presenting during the event, and we will be showing a screening of “The Journey”, a film sharing hope, connection, and resilience in the aftermath of a suicide loss.

For more information contact the mental health team at mentalhealth@saddleback.com.