Beirut, Lebanon (ANS) – Christian broadcaster SAT-7 reports that a massive explosion in the Lebanese capital Beirut early Tuesday evening, 4 August 2020, has left an estimated 4,000 wounded, at least 100 dead, and caused extensive damage to the heart of the city.

SAT-7 said their largest television production studio in Beirut – is around 10km from the blast site – with around 70 employees and freelance staff. 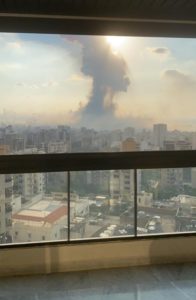 SAT-7’s Executive Director in Lebanon, Maroun Bou Rached, said, “Everyone is in shock and devastated by what has happened. Our staff are all accounted for, but the SAT-7 studios have suffered minor damage. Please pray for calm for everyone in Lebanon.”

The blast, which occurred in the city’s port, tore through surrounding buildings and blew out windows and doors across a wide area. The city’s governor estimated that 200,000 to 250,000 people have been made homeless.

Several hospitals were severely damaged and others, already struggling with rising coronavirus cases, have been overwhelmed by the influx of injured people. Lebanon’s president declared a two-week state of emergency as the new chaos brought more pain to a country facing multiple crises brought on by colossal debts, currency collapse, soaring prices, political turmoil, and COVID-19.

The SAT-7 ARABIC channel immediately put up a crawl message on screen urging prayers for the wounded and for families who have lost their loved ones. They also asked for prayers for politicians in their decision making and for Lebanon to continue as a hub for coexistence and freedom in the Middle East.

Tonight, 5 August, the team from Lebanon went live at 19:00 (local time), with a special broadcast on SAT-7 ARABIC: Lebanon, the Pain and Hope. The programme aims to cover the event and pray with viewers. Church leaders and guest speakers are invited to give insight and pray for the country’s people and future. From its studio overlooking the city, SAT-7 ARABIC live studio programmes have supported viewers in Lebanon and across the Arab world throughout the COVID-19 pandemic. The Beirut studio produces programmes for the SAT-7 ARABIC and SAT-7 KIDS channels and for a stream of education shows under the name SAT-7 ACADEMY.

Some 150 miles across the ocean, the unprecedented blast was felt in SAT-7’s International Office, in Nicosia, Cyprus.

“We did not know what was happening,” shared SAT-7 CEO, Rita El-Mounayer, who was in the office in Cyprus at the time of the explosion.  “We are extremely thankful to know all our staff in Lebanon are safe, but our hearts go out to everyone in the country who have lived through such dark days before. Please pray for calm and for peace.”