Top Posts
‘Nothing is Impossible’ movie: Hoops, romance, second chances
‘God’s Smuggler’ Brother Andrew passes to his reward
Cultivating a Prayer, Care, Share Lifestyle
God Has Plans for Your Life
Worth and Value in the Kingdom of God
Grandchildren Bring Joy and Opportunities to Our Lives
Embracing Change and Changing Lives
Dark Academia and Dead Monks
She ‘intensely related’ to Mary Magdalene character on...
The Most Powerful Thing in the World
Home ANS Feature Spreading God’s Word Through Social Media in West Africa

High Wycombe, England (ANS) – A Bible translation team in Senegal and The Gambia is using social media to spread the good news of Jesus among the Karon* people, according to Wycliffe Bible Translators. 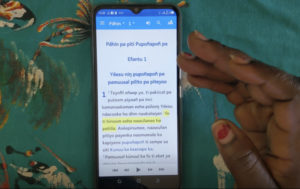 As well as translating the Scriptures into the Karon language, the team, which includes people serving with Wycliffe Bible Translators, is using Facebook and especially WhatsApp to give Karon users access to portions of the Bible.

David Lowry, who serves with Wycliffe on the Karon team, says: ‘Making the Scriptures available to people from minority language groups in their own language is an important way of helping them to understand and engage with God’s word. With so many people in Africa having smartphones, making use of social media is an easy, rapid and efficient way of spreading the good news of Jesus. Hence we could see the benefits of developing our strategy in this area.’

David continues: ‘Together with local partners, we created Kaloon* Bible Media as the umbrella name for the strategy. Facebook is getting good engagement, but WhatsApp is proving the best platform, as it’s widely used in the Karon context. WhatsApp is easy to set up and install on a basic smartphone; it allows you to connect immediately with anyone whose phone number you already have; and people can easily record short audio messages to one another in a local language that they can post on a group. This last point is crucial, since few Karon are confident in reading and writing their language. So WhatsApp allows them to connect to a message-board in Karon without needing to read or write. All the younger-generation Karon that I know seem to communicate regularly in multiple WhatsApp groups.’

As a result, the team is seeing people post lots of comments in its WhatsApp group. Sometimes they just say, ‘Well done, thanks for the great work!’, but others are sharing a thought or teaching from the Bible. David comments: ‘This the kind of engagement and interaction we’re trying to encourage!’

David comments: ‘When we started, our aim was to let people know what Karon Scriptures are available, since we realised that many in the Karon community still didn’t know about the translation project. We wanted to include engaging content that would draw people in and get them interested in hearing more from the Karon Scriptures. This is still a main goal. And we’re seeing some encouragements, not least as we see others sharing Karon Scriptures on social media too.’

As a related development, Matthias (one of the translation team) recently started a Sunday afternoon radio show in The Gambia, using the Kaloon Bible Media name. His idea is to tie in the radio show to the social media groups, as well as livestream the radio broadcast on the Facebook page. The radio show plays a section of Karon Scripture each week (starting with Luke), followed by an exposition of the passage and a panel discussion where listeners can call in.

People are responding to all this. Matthias reports: ‘I was travelling with a Karoninka* of another faith who said, “Matthias I was listening to your programme and it was very good. There were Karoninka people singing, it was very nice!”’

‘It was powerful, especially the way you broke down the Scripture. I have learnt.’

‘Thanks guys for your Bible teaching and discussion in Karoninka. It is indeed interesting to understand these topics in Karoninka. May God continue to bless your station as you preach and enlighten many people with the good news of our Saviour and his saving teaching.’

Another strategy has been the development of video clips for people to watch and share. David comments: ‘For each book of the Bible we’ve translated, we’ve held a song-writing workshop where Karon musicians write and record songs based on the Karon Bible text. These songs have been released on SD cards together with an audio recording of the Scripture text. So it’s been easy to then create a short video using these song audio files and adding some images and subtitles. As well as the song videos, we’ve also made a few videos of Matthias or another Karon colleague giving a Bible thought or advertising a resource.’

David sums this all up: ‘In Africa, as in the rest of the world, people are more and more linked in to the brave new world of “online”. Their thoughts are filled with WhatsApp discussion, friends’ Facebook posts, sharing the latest video etc. We need to bring the gospel into this world, and the fact that we can do it with audio-visual Bible resources in people’s own local languages is a great opportunity!’

With a population of 20,000 people, the Karone consider themselves to be predominantly Christian, with a growing evangelical minority, and about 30% Muslim. Traditional beliefs are also very popular.

Translation has been completed for the books of Luke, Acts and Genesis. Work is underway on John and Exodus. Both The Story of Genesis film and the JESUS Film have been translated – the latter is used extensively in outreach efforts.

*Karon is one of several names used to describe this language group. Others include Karoninka, Karone and Kaloon, depending on which part of the region you are in and who you are talking to.

Counter-cultural Love Seeks Out the Rejected