Top Posts
Colorado football coach Sanders’ unabashed faith
There’s A Light That Enters Houses With No...
Knowing the One Who Always Keeps His Word
Pregnancy Resource Centers Fight For Life Amidst Opposition
This World is Not Our Home
Lessons Learned From a Gingerbread House
Let There Be Peace on Earth
‘I Wanna Dance’ movie: Whitney Houston’s success and...
Fact Finding, Sight Seeing, and Prayer Walking
Kidney donation led to 8 life-saving surgeries
Home ANS Feature Sully H.W. Bush and the Secret Service Say their Goodbyes 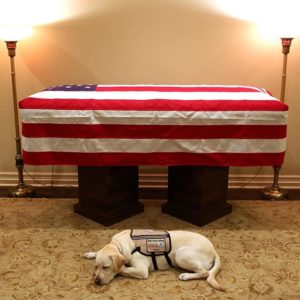 Sully H.W. Bush lies with his master in the Texas capitol.

Sully H.W. Bush is the Labrador service dog provided by America’s VetDogs to deceased 41st President George H. W. Bush. Sully, as reported by national media outlets, laid down next to his best friend for the final time this past week. For the last six months of President Bush’s life, Sully remained by his side and provided faithful and loving assistance to the president suffering from Parkinson’s disease. At 94 years of age, (June 12, 1924 – November 30, 2018) “Bush 41” was the oldest living president in American history.

Sully’s Instagram account has 235,000 followers and is up by 87,000 followers in the 4 days following the televised funeral services of President Bush 41. His Instagram account and many news outlets refer to him as “Sully H.W. Bush.” His bio also says he is “making [his] forever home” at Walker’s Point. But Monday morning, just a few days after his 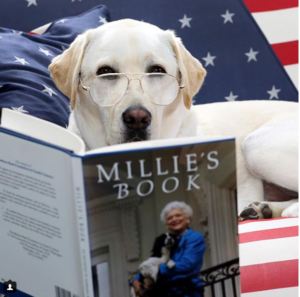 owner died, President Bush’s son, George W. Bush (43) announced that Sully is heading to his next assignment: Walter Reed National Military Medical Center in Maryland. Bush 41 believed strongly in public service. He would have approved of the new assignment for Sully H.W. Bush.

President Bush “41” was the last American president who served his country during wartime. He postponed his university studies after the attack on Pearl Harbor on December 7, 1941, and enlisted in the Navy six months later on his 18th birthday. He served as a Navy pilot and a little after two years of enlisting, at age 20 he was shot down over the Pacific. On September 3, 1944, he wrote a letter to his parents from the submarine that rescued him.

Dear Mom and Dad, yesterday was a day that will long stand in my memory. I was on a bombing hop … and we got hit. The cockpit filled with smoke ….. Watch the tremendous story here.

President “41” George Bush And the Fall of the Berlin Wall

The Berlin Wall fell November 9, 1989, ending the division of East / West Germany and initiating the fall of communism in Eastern Europe and the Soviet Union itself. This momentous and historic event took place nine months and 19 days into the Bush presidency. Though President Reagan told Mikhail Gorbachev to “tear down this wall,” it was Bush who presided over the actual dismantling. The Winter of 1991 the world worried about social unrest, food lines, and war among the ethnic groups and countries of the former Soviet Union. Under the Bush administration, various support initiatives were started to provide food and supplies to the bankrupt Soviet Union.  Mercy Projects, then known as Eastern European Outreach, sent many shipping containers of food products with subsidized shipping in that government program.

After leaving the White House in 1993, President Bush became active in humanitarian activities, always the believer in service to others. He not only held this value dear but he lived it and remained an active fund-raiser for many good causes ofter together with former president Bill Clinton (42) who beat him in the 1992 election. 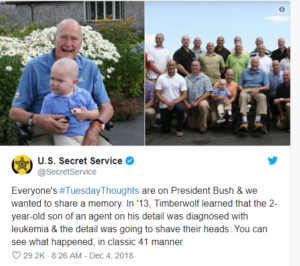 In 2013 the two-year-old son of one of the men on President Bush’s security detail was diagnosed with Leukemia. The men in that detail decided to shave their heads in solidarity with the young man. President Bush (code named Timberwolf) shaved his head as well because, as he said, “it was the right thing to do.”

You Will Be Missed

I think we can agree with the Secret Service. It was an honor to have been served by a man who believed in public service, love of country, love of God, and love of family. Former President George H.W. Bush – you will be missed by us all. 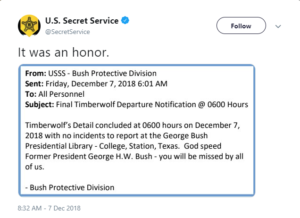