Top Posts
Colorado football coach Sanders’ unabashed faith
There’s A Light That Enters Houses With No...
Knowing the One Who Always Keeps His Word
Pregnancy Resource Centers Fight For Life Amidst Opposition
This World is Not Our Home
Lessons Learned From a Gingerbread House
Let There Be Peace on Earth
‘I Wanna Dance’ movie: Whitney Houston’s success and...
Fact Finding, Sight Seeing, and Prayer Walking
Kidney donation led to 8 life-saving surgeries
Home ANS Reports This Pastor Believes Rising Gun Violence And Conversations About Roe v. Wade Are Not A Coincidence

This Pastor Believes Rising Gun Violence And Conversations About Roe v. Wade Are Not A Coincidence

A Nation On Trial For Shedding Innocent Blood

ent of Civil Righteousness and inspiration for Pray on MLK, Jonathan Tremaine Thomas believes this spring’s raging gun violence and heated abortion rhetoric are related spiritual issues that neither lawmakers nor judges will solve with new legislation or court rulings.

Both involve one of the seven things the Book of Proverbs states that God hates – hands that shed innocent blood.

As Congress works to toughen gun laws and the Supreme Court finalizes an opinion related to Roe v. Wade, mass shootings and abortions will continue until people are awakened, spiritually, with the same divine revelation Thomas experienced in 2008.

For most of his adult life in church and a Democrat home, Thomas did not hold deep convictions about a woman’s choice to abort or keep her baby.

Until four heinous deaths in Indiana rocked the nation.

Living in Indianapolis 14 years ago, Thomas watched news reports of four murders – two African-American mothers of a toddler and an infant – at the hands of drug dealers demanding money and pot. The women held their babies, pleading with the gunmen to not shoot them; all four were killed.

At the time, Thomas had worked for over a decade in Black communities where “there were too many funerals of too many young Black men who looked just like me,” he says.

“When he yelled chills went through me and, all of a sudden, I felt like the Lord said to me, ‘You are seeing openly what I witness in private places every day.’

As a steward of the Civil Righteousness movement, Thomas’ calling is to train people in righteous behavior, biblically.

His other initiative – Pray on MLK – encourages people worldwide to gather for worship, intercession and outreach near streets, monuments and buildings commemorating Martin Luther King, Jr. 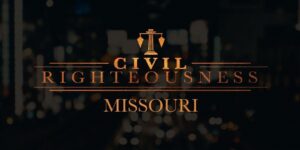 The physical, spiritual and cultural climate of today with mass shootings and angry demonstrations around Roe v. Wade mirrors the months that followed Floyd’s death.

“Maybe it’s not ironic that we find ourselves entering another hot summer,” says Thomas, noting that 2nd Samuel 11 indicates spring is the time for battle.

It was a hot summer in Nashville, Tennessee where Thomas began ministering to gang members who were gunning down each other daily in the streets, much like the carnage from mass shootings across the nation this spring.

Today, Thomas is tracking nationwide mass shootings involving three or more victims through a website, gunviolencearchive.org, and the numbers dishearten him.

Stricter gun laws are only part of the solution to mass shootings and gun violence. For believers, understanding Ephesians 6 spiritual warfare reminds them that principalities, powers and rulers of darkness influence the culture more than legislation or court opinions.

“What we are dealing with in this nation today – the homicidal violence and hands that shed innocent blood – is directly tied to the spiritual world we cannot see,” says Thomas, a pastor and missionary.

Culture is becoming intensely possessed by demons who plant murder in the hearts of people. Entertainment is one of the mediums they use to spread a culture of death.

“I can watch Netflix to see people get killed,” says Thomas, himself a fan of one of the streaming service’s shows.

As Uvalde, Texas mourned the innocent blood of 19 school children gunned down at the hands of an 18-year-old mass murderer, Netflix began airing the fourth season of a show Thomas enjoys – “Stranger Things.”

A disclaimer before the show began indicated that, due to the mass shooting in Uvalde, Netflix was compelled to warn viewers of disturbing images of dead children.

“Yet, they’re cashing in on the millions of viewers who are absolutely hooked on this story, feeding their appetites for murder. We were not made to behold even simulated murder. Yet it’s been so indoctrinated through entertainment that we’ve become desensitized,” Thomas says.

With Jesus as the center, Civil Righteousness is comprised of people on the left and right of gun-law and abortion debates.

“We have to be willing to let Jesus wage war on the things we’ve accepted in our culture that stand in direct opposition to the way of the cross. We cannot embrace as a way of life instruments of death, then say we care about being pro-life. It’s pro-life for the born and unborn,” says Thomas.

A father in the St. Louis, Missouri area, Thomas says it’s important for parents to have honest conversations with their children about mass shootings, and to pray for and with them.

As a family and ministry leader, Thomas believes prayer, spiritual warfare, forgiveness and love are offensive weapons believers should employ. “We know our streets are filled with shooters. We pray for them,” he says.

God’s Promises Can Lead to Lemonade