Top Posts
Knowing the One Who Always Keeps His Word
Pregnancy Resource Centers Fight For Life Amidst Opposition
This World is Not Our Home
Lessons Learned From a Gingerbread House
Let There Be Peace on Earth
‘I Wanna Dance’ movie: Whitney Houston’s success and...
Fact Finding, Sight Seeing, and Prayer Walking
Kidney donation led to 8 life-saving surgeries
The Power of Curiosity
When Love Came Down at Christmas
Home ANS Reports Urim Books celebrates its 30th Anniversary 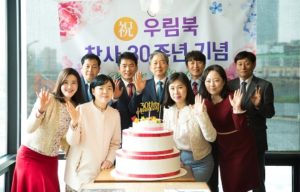 Urim Books have published 112 books in total, all authored by Rev. Dr. Jaerock Lee, that explain God’s love and the providence of salvation. And the books contain the messages that the author, Dr. Lee, says that he had received from God in the Spirit’s inspiration by myriad times of fasting and prayer.

Many of the books have been translated into 61 languages, and now there are 516 versions of the books in multiple languages. There are also 530 editions in 58 languages in total available in the electronic format.

They are distributed worldwide via Amazon.com, Barnes & Noble of North America; Kinokuniya of Asia; Adlibris of Europe; Exclusive Books of Africa; Souq.com of Middle East and Opentrolley.com of Asia, etc.

And their e-books are available in Kyobo Book Centre, Ridi Books, and Interpark, South Korea based e-book sellers, and are distributed world-wide on Kindle e-readers, iBooks, and Google Play Books, etc.

Elder Sungnam Bin, the CEO of Urim Books and a board member of the Korean Publishers Association, says, “Author Dr. Lee’s books allow readers to reflect upon the meaning of true love and adds to God’s grace to them.” and he went on to say, “Books are still the biggest tool for introducing people to Jesus. We are going to broaden our book ministries by harder prayers to win more souls in South Korea and around the world.”

Joseph Park can be contacted at urimbook@hotmail.com