Top Posts
Knowing the One Who Always Keeps His Word
Pregnancy Resource Centers Fight For Life Amidst Opposition
This World is Not Our Home
Lessons Learned From a Gingerbread House
Let There Be Peace on Earth
‘I Wanna Dance’ movie: Whitney Houston’s success and...
Fact Finding, Sight Seeing, and Prayer Walking
Kidney donation led to 8 life-saving surgeries
The Power of Curiosity
When Love Came Down at Christmas
Home ANS Feature Victims of Easter bombings in Sri Lanka still waiting for justice

Witney, England (ANS) – Victims of the Easter bombings in Sri Lanka say they have had no justice 18 months after the attack which killed more than 250 people and injured hundreds more.

Open Doors UK and Ireland, a charity which campaigns on behalf of persecuted Christians, says that as police investigations drag on, people are living with the effects of the attack. 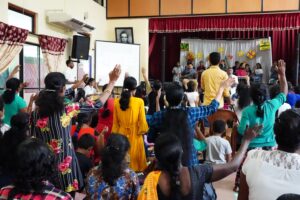 A service at Zion Church whose members are now meeting in a temporary hall while their bombed building is being repaired.

A service at Zion Church whose members are now meeting in a temporary hall while their bombed building is being repaired.
Tala Dela Cruz, an Open Doors spokesperson said: “It is still so heart-breaking. Zion Church on the east coast of Sri Lanka lost 31 of its congregation – all of whom were mothers, husbands, children, brothers and sisters to people.
“Eighty-six other people at the church were injured. People are still receiving medical treatment with operations and physiotherapy and one or two are paralysed.
“Zion is only one church out of the three that were bombed on that day.
“Many more died from the attacks at St Anthony’s shrine and St Sebastian’s Church and at the three hotels. These targeted attacks have brought so much pain. We are still praying for justice for the victims and healing for their families. 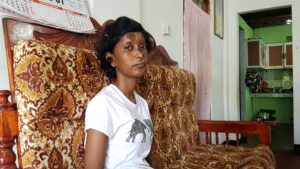 Nine suicide bombers detonated their devices at the three churches and three luxury hotels, the Shangri-La, Kingsbury and Cinnamon Grand in Colombo on Easter Sunday last year.
The multiple coordinated explosions shocked the world and caused outrage among the different ethnic and religious groups in Sri Lanka.
Shortly afterwards, the country’s authorities said local militant group the National Thowheed Jamath (NTJ) were to blame. However, the Islamic State later claimed responsibility.
In April this year, on the anniversary of the attack, Archbishop of Colombo Cardinal Malcolm Ranjith said that while the church in Sri Lanka has “spiritually forgiven” the attackers, their supporters should still be brought to justice.
According to local news reports this June, with 200 suspects in custody, police announced they were close to concluding the investigations into the Easter bombings.
Now several suspects arrested in connection with the bombings have been released with the Government blaming a lack of evidence.
The move prompted criticism from the Cardinal who said in a press conference on October 3: “It is sad and unfortunate that those who are alleged to have been involved in the attacks are released.
“Those who are affected physically and mentally wait for justice to be meted out, but it is unfortunate that the investigation is not going the way it should.”
On October 4 relatives of the victims of the Easter bombings protested in front of St Sebastian’s Church, north of Colombo, demanding a fair and thorough investigation and for justice to be done.
previous post