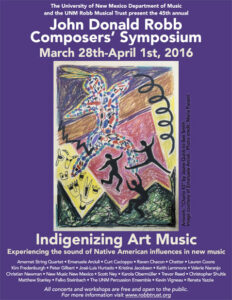 In 2016, friends and I attended the John Donald Robb Composer’s Symposium at the University of New Mexico.  The night we attended featured music by Native American composers entitled Indigenizing Art Music.    Though all the music performed was marvelous, I was particularly struck—for the sheer modernism of the work—by Raven Chacon’s Double Weaving.  After the concert I looked for Chacon—not to meet him, per-se, but to view the person responsible for the composition.

To my surprise, he was a kindly Navajo (Dine´) composer, smiling and chatting with other musicians.   I don’t know what I was thinking, but a brooding, black-clothed wraith wouldn’t be too far off my thoughts. 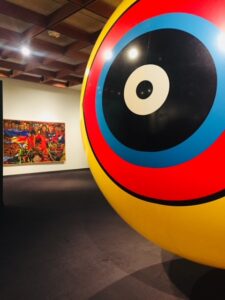 Interestingly, I knew of Chacon—not so much from his music—but his visual art.  As an Albuquerque resident, Chacon was part of an arts collective known as Postcommodity. I first got wind of Postcommodity’s work after moving to New Mexico in 2008,  but  really took notice with Repellent Fence, a land-art exhibit placed along the US/Mexico border in 2015. Though unable to see the work along the border, in 2018 one of the balloons used for Repellent Fence found its way into an exhibit at the Albuquerque, Museum of Art.

Fast forward six years and Chacon is now the first Native American recipient of the Pulitzer Prize in Music, awarded in May 2022 for his chamber work, Voiceless Mass.

What makes Voiceless Mass so intriguing—at least from a Christian standpoint—is the interconnection between Christianity and indigenous point of view.  “Mass,” as you’d expect, references the Christian worship service.  One can speculate about the name “voiceless.”  Is it a reference to the unheard cry of Native people, the “mass” of voices rendered silent?  Or is there a plain meaning to the name:  there’s no human voices in the composition. For Chacon it’s much deeper.

In episode #26 (January 2022) of Future Stops—a podcast dedicated to organ music—Chacon notes “the complicated history,” between the Church and Native Americans. But his main consideration for the piece was taking into “account the church and thinking how music is integrated inside a building of a church.”  Chacon asks, “What are the opportunities for other voices in a church?  It’s a place of sermons, a place of silence, a place to reflect, a place to go and pray.  Growing up Catholic (half Catholic), I was thinking of that. There’s voices: the voice of God, and non-voices, the [voice] of reflection, of silence, and praying.”

It appears that, for Chacon, the “voiceless” side he captures in the composition is that of the non-voice: silence and reflection.  If so, it’s a beautiful sentiment, something all people can relate.

Voiceless Mass is the first composition Chacon wrote for a church to be performed in a church. 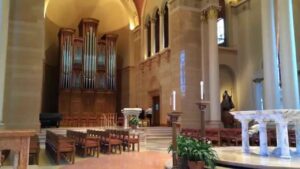 Cathedral of St. John the Evangelist

In the entry for the Pulitzer, Chacon states, “Voiceless Mass is a large ensemble work commissioned by WI Conference of the United Church of Christ, Plymouth Church UCC, and Present Music and composed specifically for the Nichols & Simpson organ at The Cathedral of St. John the Evangelist in Milwaukee, Wisconsin but can be performed in any space of worship with high ceilings and pipe organ.

“The composition was a site-specific commission to utilize the organ for Present Music’s annual Thanksgiving concert. As an Indigenous artist, I make a point not to present my work on this holiday, but in this case I made an exception.

“This work considers the spaces in which we gather, the history of access of these spaces, and the land upon which these buildings sit. Though ‘mass’ is referenced in the title, the piece contains no audible singing voices, instead using the openness of the large space to intone the constricted intervals of the wind and string instruments. In exploiting the architecture of the cathedral, Voiceless Mass considers the futility of giving voice to the voiceless, when ceding space is never an option for those in power.”

Water and the Word, for Life, In Jesus’ name