Top Posts
Vision For One Billion Souls By 2030 Unites...
Middle East Christian Converts Receive Bullet Death Threats
The World Needs More Audras
The Significance of the Seventh Man
Will A Second Jesus People Movement Spring From...
It’s Never Too Late to Share your Faith
‘Elvis’ movie: All Shook Up meets Heartbreak Hotel
This Pastor Believes Rising Gun Violence And Conversations...
God’s Promises Can Lead to Lemonade
How a truck driver, homeless man, and Iranian...
Home About Us We Must Call Him Dan Juma 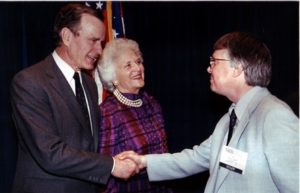 Dan Wooding, the founder of Assist News Service, has gone home to be with the Lord. An award-winning journalist, Dan was born December 19, 1940, in Nigeria to British missionary parents, Alfred and Anne Wooding from Liverpool.  He later wrote of that event in his autobiographical book From Tabloid To Truth:

“As the former Austrian house painter, Adolf Schicklgruber, better known as Adolf Hitler, was trying to take over the world, I was struggling to get into it”

“You’ve got a boy, Anne,” said Dr. Percy Barnden, a British missionary doctor, as he snipped my umbilical cord and then slapped a mosquito that was probing his arm. My father, Alf, was anxiously waiting in our mud-walled home in Izom, a remote bush village some 600 miles away, for news of the birth. (The hospital called a British outpost in a nearby city.  They sent a courier the next day on a 30-mile hike into the African bush to inform Dan’s father Alf.)

“You have a son,” beamed the exhausted courier to a background of bleating goats, barking dogs and shouting boys.  A cheer broke out among the many villagers crammed into the small Wooding compound. They laughed, danced and clapped their hands.

“We must call him “Dan Juma,” which means “Son of Friday,” said one of the natives, dressed only in a loincloth. “Yes,” the others chorused. “He is to be Dan Juma!”

“You will call him Dan Juma.”

My father decided not to tell them that I had, in fact, been born not on Friday, but Thursday. (excerpts from: From Tabloid To Truth available here.)

Sadly, our Dan Juma, our friend, our chief storyteller, a former Fleet Street tabloid journalist, and the creator of the term “media missionary,” has received his promotion to heaven.  March 18, 2020, after a two-year battle with cancer, the founder of Assist News and a passionate supporter of the Persecuted Church, has gone to his reward.

In Memory of Dan
Dan’s exciting story as told in From Tabloid To Truth will inspire generations to come.  His son Peter Wooding, along with other volunteers carry on the ministry of Assist News.  Norma asks that in lieu of flowers, donations be made to Mercy Projects in Murrieta, California in memory of Dan.
previous post

UK Charity Celebrates As Over 6,000 Birthdays Are...