Top Posts
The Jesus Movement and Contagious Faith
Christian Product Expo underway in Lexington
Advanced Writers and Speakers Association announces winners of...
God Saves Your Tears in His Bottle
Overcoming Common Misconceptions and False Assumptions
Character-Building Dilemmas
Set Your Heart on Things Above
The Power of Facilitating Partnerships and Collaboration
When We Don’t Feel Worthy
Vision For One Billion Souls By 2030 Unites...
Home ANS Feature “What then shall I do with Jesus?” 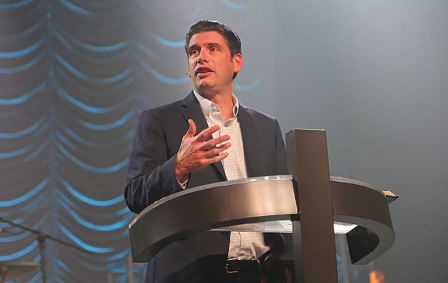 For Christians, Easter is one of the most holy times of the year.

By Will Graham, Special to ASSIST News Service 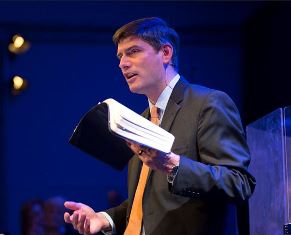 CHARLOTTE, NC (ANS – February 20, 2018) — With all that surrounds the holiday from a worldly perspective, however, I find that many people simply miss the point of why we rejoice. Easter exists because Jesus died for our sins and conquered the grave. We celebrate life at Easter, because death lost its sting with Christ’s triumphant resurrection.

Sadly, so many of our family, friends and neighbors enjoy Easter, but have never experienced the true meaning of it. They may know of Jesus and what He accomplished on the cross, but they can’t or won’t make a decision about Him as their Savior.

In the Bible, we see a man who will forever be linked to what we call Easter. He talked to Jesus directly, he evaluated him, and yet he too couldn’t bring himself to make a decision about what to do with Christ.

His name was Pontius Pilate, and Matthew 27:11-25 tells us a lot about this Roman Governor who oversaw the trial of Jesus. 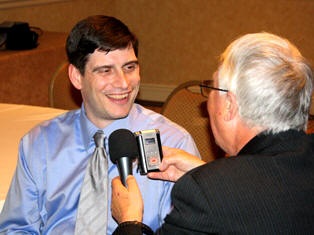 First, Pilate rejected Jesus’ own confession of who He was: the Christ, the Savior. Pilate asked the question and heard the truth (straight from the mouth of the Son of God), but he took it no further.

Second, Pilate rejected clear evidence. Pilate investigated Jesus and came to the conclusion that He was innocent, finding that He had committed no crime. Pilate realized that the only reason Jesus was on trial was the envy and hatred of the religious leaders, but he rejected that truth.

Third, Pilate gave in to pressure. Though he heard the claims of Christ and knew He had done nothing wrong, Pilate was compelled to sentence an innocent man to death because of the influence of the crowd.

Finally, Pilate tried to cleanse himself from the death of Jesus. He knew that he had just condemned an innocent man to die, and he was responsible. In a symbolic gesture, he washed his hands and proclaimed the guilt for Christ’s death on the crowd instead.

My friends, Pilate had a decision to make. He knew the truth, but he couldn’t take a stand one way or the other. Instead, he asked a question: “What then shall I do with Jesus who is called Christ?” (Matthew 27:22, NKJV) 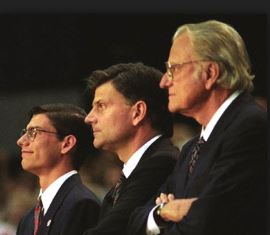 That’s the question that so many today, perhaps even you, have a hard time answering. In far too many situations, people know the truth but – like Pilate – they give in to the pressures of others and walk away from Jesus, putting the decision off for another day.

However, indecision is a decision. Making no decision for Christ, is making a decision about Christ. And it’s one that has eternal consequences.

If you have been putting off the decision to follow Christ and make Him the Lord of your life, now is the perfect time. Jesus’ death and resurrection, which we celebrate as Easter, paved the way for you. I encourage you to receive that hope and accept Him as your Savior today!

Photo captions: 1) Will Graham preaching. 2) Will Graham being interviewed by ANS founder, Dan Wooding, who began his journalistic career in London in 1968, when he became a reporter for The Christian, Billy Graham’s then British newspaper. Dan has since worked with Billy Graham as a writer at his overseas crusades in Moscow, Russia; Essen, Germany; and San Juan, Puerto Rico. 3) Three generations of Grahams — Will, Franklin and Billy. 4) Will Graham with his grandfather Billy Graham, who recently celebrated his 99th birthday., 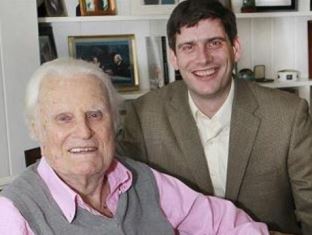 About Will Graham: Will is the third generation of Grahams to proclaim the Gospel of Jesus Christ under the banner of the Billy Graham Evangelistic Association (BGEA). He also serves as vice president of the BGEA, and as executive director of the Billy Graham Training Center at The Cove in Asheville, N.C. He is the son of Franklin, and grandson of Billy Graham. Follow Will on Facebook at www.Facebook.com/WillGraham4 and on Twitter at www.Twitter.com/TellaGraham.

** You may republish this or any of our ANS stories with attribution to the ASSIST News Service (https://www.assistnews.net/). Please tell your friends and colleagues that they can receive a complimentary subscription to ANS by going to the above website and signing up there.

Can God make something of this mess?

Thousands of Girls in Asia Saved From Terrible...