Top Posts
Colorado football coach Sanders’ unabashed faith
There’s A Light That Enters Houses With No...
Knowing the One Who Always Keeps His Word
Pregnancy Resource Centers Fight For Life Amidst Opposition
This World is Not Our Home
Lessons Learned From a Gingerbread House
Let There Be Peace on Earth
‘I Wanna Dance’ movie: Whitney Houston’s success and...
Fact Finding, Sight Seeing, and Prayer Walking
Kidney donation led to 8 life-saving surgeries
Home ANS Feature With Salvations, Baptisms and Healings in Colorado, The Standard Asks ‘What’s Next?’

With Salvations, Baptisms and Healings in Colorado, The Standard Asks ‘What’s Next?’

In what might be a first for Colorado and the nation, students attending a youth conference were baptized at the state Capitol in Denver, where pastors and ministry leaders placed a corrugated metal trough just below the office window of Governor Jared Polis. 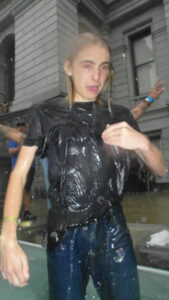 A young man, Haven, is baptized at the Colorado Capitol.

Just as teens and adults stepped into the water on two consecutive afternoons, the sky over Denver poured torrential rain that soaked candidates enough to qualify as baptism. But mere sprinkling of believers in Denver was just the beginning; they were then fully immersed in water and raised to new life – and to the sounds and sights of cheers and cameras.

People giving their lives to Jesus for the first time or in rededicating themselves to the Lord were dunked during the three-day youth conference, which included 60-hours of continual prayer and worship, and equipping students for ministry outreach by youth leaders Lou Engle, Gary Black and Chad Dedmon.

Those who received ministry from the students during two days of outreach on the 16th Street Mall in Denver followed them to the Capitol for worship and baptism, and still others were drawn by the sounds and sights of music and dance declaring the standard is Jesus.

Depression, unforgiveness, addiction, abuse, pornography, comparison, anxiety, gender neutrality and a sexual agenda directed at youth are not the standards for their generation, said Shannon Clark.

One of the ministries Clark leads, The Standard, hosted the conference with assistance from pastors and churches from Denver to Colorado Springs and Youth With A Mission (YWAM) leaders,  who prayed for and ministered to students hungry for hope and direction. 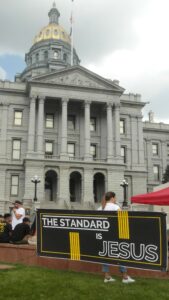 The Standard’s prophetic name and mission mirrors the words of Isaiah 59:19 which reads: “When the enemy comes in like a flood, the Spirit of the Lord shall lift up a standard against him.” (MEV)

Broken by suicide and mass shootings across the nation, Clark told the Lord she would begin in Colorado and then raise The Standard wherever he leads. In a prophetic dream, Clark believes the Lord spoke to her saying, “The Standard is for the nation.”

Declaring the standard is Jesus against a spirit of suicide targeting youth, Clark opened the conference by asking students: “How many of you know somebody who has attempted suicide, or who has committed suicide?”

A former youth pastor and graduate of the Bethel School of Supernatural Ministry in Redding, Calif., Clark told students they were called to be like the biblical King Josiah who turned his nation from idols.

She then asked students to raise their hands if they wanted to received Jesus as Savior and Lord. A high-schooler named Haven was the first to respond and, the next day, he told his peers Jesus had delivered him from anxiety.

“Lord, show them what you want; what’s important,” said Haven, who was baptized in rain and the water trough that afternoon. 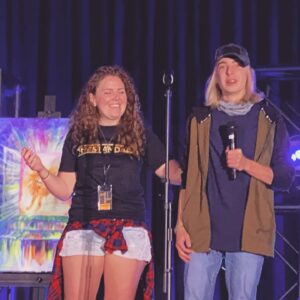 The Standard’s Shannon Clark, left, listens as a Haven shares his new commitment to Jesus and deliverance from anxiety.

A girl named Libby said she had suffered from severe depression since the fourth-grade. “But that’s not my testimony. This is: I’ve had difficulty with someone – a guy – because of painful memories. I’m on a new path toward forgiving, seeing him every day,” Libby told her peers from the stage.

Another girl with a torn meniscus and ACL injury received prayer for healing of those and other conditions. She testified of improvement after healing hands were placed on her, accompanied by prayer.

Clark declared over students, “You’re called to be like the biblical King Josiah, who was anointed to rule at eight-years-old. Talk about a major pressure role. Me, being a queen as a 31-year-old let alone an eight-year-old, isn’t right.”

At 18, Josiah realized his nation needed to knock down idols that the people had exalted in their hearts above the one true God.

“I’m calling the Josiahs out in this moment,” Clark said.

This Josiah generation, Clark said, is called to find the word of the Lord for this season and declare it in their spheres of influence. “Kingdom righteousness looks like the lost become saved, the hopeless come into family, and the broken are made whole. 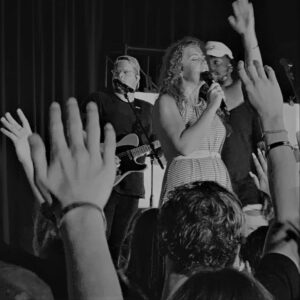 “That’s what kingdom justice looks like, and I believe we are dispersing the kingdom of darkness with the kingdom of God,” Clark said. “The types of things God is bringing are, honestly, judgment on the demonic but it’s going to look like the lost coming home,” she added.

One of those prodigals – a woman named Rachel – was drawn to the worship and crowd gathered at the Capitol. Tossing her old life of abuse, drugs and alcohol away after receiving one-on-one ministry from a leader, Rachel decided to get baptized. Later, she was invited to the youth conference where, from the stage, Rachel spoke to teenagers about her newfound freedom.

“Rachel is the one we’ve been praying for, really for people like Rachel to wander in and have an encounter with God,” Clark said. “She had a turning-point moment on a significant scale.”

Missionary, pastor and author Gary Black, who lost a son to suicide in 2013, told students he held onto hope in the process of grieving the agonizing end to his marriage and his son’s life. He told students there’s hope for them, too.

“There’s a whole new thing God’s doing on the planet (using) COVID and stuff. I’m going to show you right now hope is coming. We win this thing.

“I know you’re going to hear a lot about this. I love revival but I’m not looking for it. Guess what?

“You are revival. You are the human embodiment of Jesus Christ. You are God with skin on the planet,” Black said.

Clark said harvest is upon us. “It’s harvest and it’s out there. We are in harvest. We are fully in harvest. The wheat fields are ready and ripe and so, for me, there’s something about getting your hands dirty, the nitty, gritty of that,” she said. 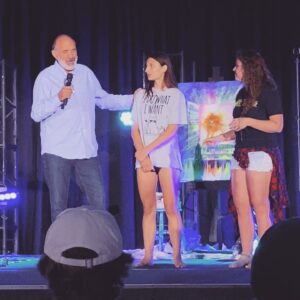 Speaking to students, Engle encouraged them to declare truth over their lives for healing from long-lasting depression and anxiety. Inviting students on a pilgrimage with God based on Psalm 139, Engle exhorted students to speak blessings and the Word of God over themselves, and to prophesy as they lay hands on their heads and hearts for 30 days.

As a father and grandfather, Engle then placed his hands on each student speaking blessings over his or her life, praying for baptism in the Holy Spirit and in the Father heart of God.

Clark reiterated the 30-day challenge, suggesting a follow-up to The Standard just as students are returning to their campuses.

“I believe now more than ever these kids need to know truth. I believe there are messages – not just from me – but other voices in our society to really push truth.

“So, for me, part of the next thing that I’d like to do with The Standard is to actually have resources going out every day, every week that are easily referenceable for students who need encouragement to stay in truth. So whatever didn’t get spoke here, there’s space and voices God has created for that, I believe,” Clark said.

“So 30 days from now, I am actually hoping to plan a one-night event as well. Like 30 days from now, August 30 or 31st, even September 1 for that matter to say we’re going to do a big worship night. No charging or anything like that, we’re just going to come together and come and worship Jesus together. Bring your friends. Do that consistently through the year, leading up to next year,” Clark said.

She believes the Lord wants to do The Standard annually based on a series of dreams she received from him.

“So the Lord, I believe, is the one who is building this. At the end of the day, we’ll do as much or as little as He says. So if this event was a one and done, I’m totally fine with that. This wasn’t my bright idea to begin with. He just kind of dropped it in my spirit,” Clark said.

But a dream from the Lord suggests The Standard is for the nation, said Clark whose youth pastor, Jesus Culture Leader Banning Liebscher, asked assembled teams in Clark’s night vision the who, what, when and where of ministry.

“In the dream, I saw a map of the nation, of the U.S. When I woke up, I knew the Lord is the one who brings increase; we’ll go as far as He wants to go but I do believe there is something based off that dream – set in the strategy room of Jesus Culture – that doing a national youth movement as big or as small as it will be, is the Lord’s heart for The Standard,” Clark said.

The events at the Capitol in Denver confirm the dream, Clark believes.

“It was a dream in my heart because I felt like the Lord wanted to take territory at the Capitol, just from a governmental space, not a political place, because I don’t care for that conversation right now. The kingdom government space where God is above and beyond any of our political realm. So to be in that space and actually baptize people was so radical. Soaking wet to the bone. So ridiculously wet,” Clark said. 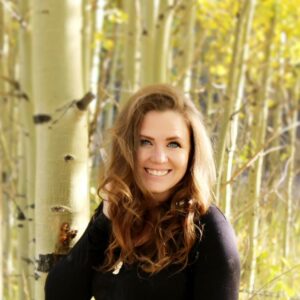 “When I heard the word about six years ago I like got wrecked by the Lord and I knew this is what I was made for, whatever this looked like,” Clark said.

Engle believes something is coming that is stronger than rebellion against God marking the nation. He founded the prayer and fasting movement The Call, which put 400,000 youth on the National Mall after Promise Keepers packed it with men seeking God for themselves and their families.

“I think that was the mark of the Call and, in a small measure, the mark of my own life. I’m believing we will see the greatest awakening,” Engle said. “That was my divine summons. The Call, I believe, was part of the answer. And I believe The Send now. We’re believing for 80 million souls, 200,000 laborers in America.

If this generation could see who comes seeking them in their sin and shame over struggles with homosexuality and pornography, it would transform the world, Engle believes. “The Lord is coming with fire in His eyes, and he is hotly pursuing you,” he said. “There’s a Billy Graham in this room,” he added.

What Does it Look Like to Walk the Talk?