Top Posts
‘Nothing is Impossible’ movie: Hoops, romance, second chances
‘God’s Smuggler’ Brother Andrew passes to his reward
Cultivating a Prayer, Care, Share Lifestyle
God Has Plans for Your Life
Worth and Value in the Kingdom of God
Grandchildren Bring Joy and Opportunities to Our Lives
Embracing Change and Changing Lives
Dark Academia and Dead Monks
She ‘intensely related’ to Mary Magdalene character on...
The Most Powerful Thing in the World
Home ANS Feature David Berkeley’s Prayer 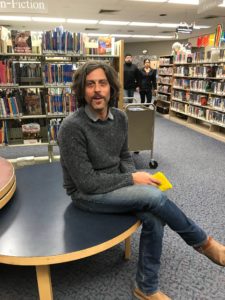 David Berkeley at the Taylor Ranch Library in ABQ, NM

ALBUQUERQUE, NEW MEXICO—It’s fitting that an author and songwriter would perform a concert in a library.  But when it’s a respected singer-songwriter and author, whose work is noticed in the pages The New York Times, Philadelphia Inquirer, RollingStone.com, Paste Magazine—and more, finding airplay on This American Life and host of radio stations across the country, one has to stop what they’re doing and go to the land of books and bureaus.

This is the case with David Berkeley.

The Faded Red and Blue

As part of Amp Concerts Music in the Library program, the nationally respected Berkeley sang, read, and performed two concerts at two different Albuquerque library locations.  Helping promote his new EP, The Faded Red and Blue, a work Berkeley describes as “political love songs,” he performed pieces from the new recording in addition to other highly acclaimed CD’s, including Cardboard Boat. 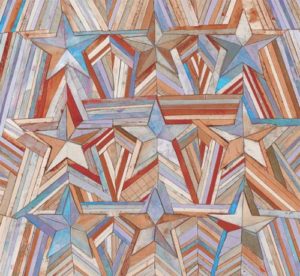 Wearing blue jeans, brown, warn boots, and a gray sweater, the 42-year old singer quickly set up his gear, saying he was “almost late” due to the traffic.

As Berkeley geared up I looked around the room, which happened to be in the children’s section of the Taylor Ranch branch.  In the audience were an assortment of folk, but mostly middle-aged men and women, with a few kids sprinkled in between.  I wondered to myself if the group knew the quality of artist that was about to perform, a master craftsman of love and longing.  When co-founder and director of Amp Concerts, Neal Copperman, introduced Berkeley, asking who in the audience had seen David live, only of a handful of people raised his or her hand. I thought to myself: boy will they be in for a surprise.

In his hour-long concert, Berkeley did not disappoint. 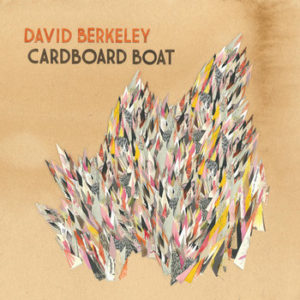 Beginning with his song Wishing Well off Cardboard Boat (the song is about a character referenced in an accompanying book by Berkeley, The Free Brontosaurus), Berkeley moves to Brighter Day, another song off Cardboard Boat.  Berkeley explains Brighter Day, of all things, is written from the perspective of a librarian, Aliza, who is searching for God, finding God in the faces of the people she sees at the library.

Berkeley’s next song is the title track from his new EP.  The song is entitled Faded Red and Blue.  Berkeley tells the audience that the inspiration for the song came from seeing the actual flag that inspired the composition of the Star-Spangled Banner.  Berkeley’s song has political symbolism, with references to immigration.  Prior to playing, Berkeley humorously states that the political love song is a genre not “fully explored.” 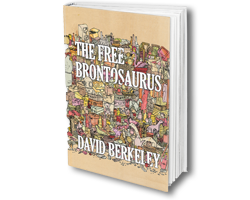 After singing more songs and reading two stories, one from The Free Brontosaurus, the other from his first book 140 Goats and Guitars (having the audience laughing out loud), Berkeley concludes the evening with the song This Be Dear to Me.

This Be Dear To Me

As a stand-alone song, This Be Dear To Me is exceptional, classic Berkeley: haunting, full of longing and love.  The song, Berkeley states, is about “how to stay positive” in the midst of political chaos.  He began writing the song by jotting down what he loves in life: people, creation, and relationships.  Later, he dwindled the list down to things he holds dear, saying “I hope these are the things people find worth fighting for.”

Before preforming the song, Berkeley talks a little about the music video.  Besides the handwriting of the lyrics written by one of his sons, the artwork was taken from a 40-foot painting made by Berkley’s friend for the movie Off The Map, a film about love and loss, starring Sam Eliot. 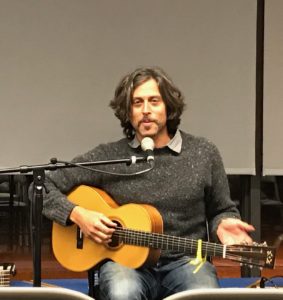 But the song is more than a political love song; it’s a prayer.  The refrain is the Hebrew word for God: Adonai.

As Berkeley sang, the audience began to sing along: “this be dear to me,” reciting the prayer-like stanza.  For a moment, the land of books and bureaus became a house of worship.

It was a beautiful moment, something worthy of Berkeley’s music.

Berkeley leaves to Europe to tour with his duo, The Son of Town Hall, but you can find a list of his upcoming concerts here:  http://davidberkeley.com/tour/

Afghanistan Declared The most Dangerous Place to be...