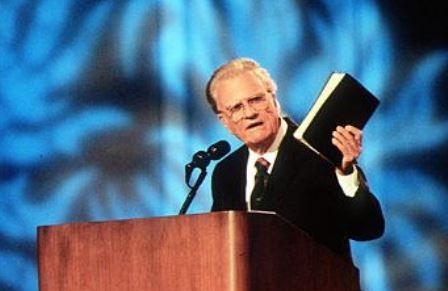 He was the man who first got me into journalism 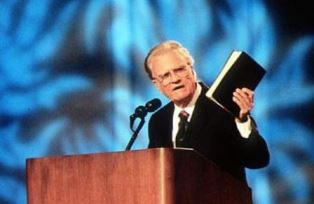 MONTREAT, NC (ANS – February 21, 2018) — American evangelist Billy Graham — a confidant to presidents, a guiding light to generations of American Christians and a world-traveling preacher who saw millions give their lives to Christ, died today (Wednesday, February 21, 2018), at the age of 99.

Graham, who was known as “America’s Pastor,” passed away at his home in Montreat, North Carolina.

“The skinny preacher with the booming voice evangelized to nearly 215 million people over six decades and prayed with US presidents from Harry Truman to Barack Obama,” said CNN.

He was the reason I got into journalism

But on a personal side, it was 50 years ago in London, England, when I got my first job in journalism. It was with The Christian, an historic British newspaper that the Graham Association had bought and modernized.

I’ll never forget my first day in their Camden Town, London, office, when the editor, Dr. J.D. Douglas, wecolmed me on board the paper, and then told me that my first interview would be with Coretta Scott-King, widow of Dr. Martin Luther King, Jr., who was to speak at St. Paul’s Cathedral at his Memorial Service. 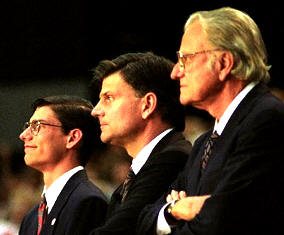 It certainly was an amazing way to start my career in journalism, but sadly, after a year there, the paper was shut down by the BGEA for so-called “financial reasons” and we were all out on the streets. I was married with two sons to support, so it was quite a shock.

Fortunately, I soon secured another position on a local newspaper in London, and not long after the closure of The Christian, I was reporting on an event in the West End of London, where Billy Graham was to speak to the stars of many of the big shows in Theatre-land there.

When he arrived, Mr. Graham went around the room introducing himself, and when he got to me, the 6 foot 3 inch evangelist said, “Hi, I’m Billy Graham. What is your name?” Without thinking, I said, “Mr. Graham, my name is Dan Wooding. You may remember that you fired me a few weeks ago.” There was an embarressed look on Billy Graham’s face, as he tried to explain that it wasn’t his decision to close the paper, but that of his board.

After that I finished up working in the British tabloids, and I never thought I would every work for Billy Graham again, especially during a period when I had lost my confidence as a journalist, feeling that God couldn’t really use a former tabloid-journalist.

Norma, my wife, and I had moved to Southern California with our two sons, Andrew and Peter, from the UK ten years earlier, and we had eventually launched ASSIST (Aid to Special Saints in Strategic Times), as a ministry to help persecuted Christians around the world.

As ASSIST began to grow, I had decided to just concentrate on running the ministry. After all, wasn’t that more spiritual than being a journalist?

Or so I thought at the time!

But it all changed when I received a phone call from A. Larry Ross, who was then Billy Graham’s press officer, in which he said, “Dan, you know that Mr. Graham has been going to Russia for years now.”

“Yes, and we are running a pen pal ministry with new believers there,” I cut in, thinking that he wanted to know more about our Bridge of Friendship Russia program.

Larry said politely that he thought that was “very interesting” and then added, “Mr. Graham has been invited to Moscow to hold a crusade there. It will be the first time that he can openly invite people to receive Christ.”

He paused for a moment, and then said, “We’d like you to come and join our media team and use your journalistic skills to report on this historic Mission to Moscow.”

I felt all the air being sucked out of my lungs when he then added, “We feel your tabloid skills could be used to portray what is going to happen there. When could you get on a plane to Moscow?”

I stammered my thanks and said that I would be honored to go and so he said arrangements would be made for my air ticket and visa and he would like me there “as soon as possible.”

When I put the receiver down, Norma looked at me in a strange way.

“Larry Ross wants me to fly to Moscow to join his media team and use my journalistic skills,” I said, trying to take in what was being asked of me.

I also recalled how, sometime after I had moved to America, someone I was working with had told me that I really “couldn’t write” and I believed that. I had figured that my tabloid past had been a complete waste of time, and could not be used by the Lord.

Norma smiled and said pointedly, “It’s a good thing that Billy Graham doesn’t know that you ‘can’t write.’” I smiled weakly in response.

Within a few days, the tickets and the visa had come through and I drove to Los Angeles International Airport to fly to Moscow, via Frankfurt, Germany.

After checking into the President Hotel, a formerly secret place that had been built for communist leaders visiting Moscow like North Korea’s Kim Il-sung, I went to bed to get a good night’s sleep and prepared for an exciting three weeks.

It was amazing as Billy Graham’s historic Moscow crusade, held in October 1992 in the indoor Olympic Stadium which, twelve years earlier, had been the site of the Moscow Olympic Games that the United States had boycotted, was quite incredible.

I spent three wonderful weeks meeting with Billy Graham along with Larry Ross, and worked on the various news releases that went out around the world, the first of was called, “A Miracle in Moscow.”

And it sure was that. What a crusade it was to report on! Each night eager Muscovites filled the 38,000-seat stadium to hear Billy. On the first evening inquirers coming forward signed 10,641 cards of commitment; on the second evening 12,628 signed. On the closing Sunday afternoon 50,000 persons had jammed into the stadium, and apparently the fire authority didn’t limit them. Another 30,000 stood outside in the freezing cold where a huge television screen with audio echoed what was happening inside. The number of decision cards signed was 19,417.

A highlight was being able to film the Red Army Choir singing “The Battle Hymn of the Republic,” which still sends shivers down my spine. Another, which I will never forget, was when, on the final night, Joni Eareckson Tada, who had been sitting in the wheelchair section of the stadium, was brought up onto the stage, to share her extraordinary story, and was interpreted by a blind Russian translator. By the way, Mr. Graham was suffering from Parkinson’s Disease when he spoke, and it was illustration to me on how God can use anyone, despite their disabilities, for His Glory.

When I got home, I then knew that I had to re-start my journalistic career and so I began the ASSIST News Service (www.assistnews.net) as a first step.

I had finally realized that God can use even an ex-tabloid journalist to spread the word about what He is doing in His World. I would also work with him as a writer at his overseas crusades in Germany and Puerto Rico, and also wrote the cover story on Billy and Franklin Graham for the Saturday Evening Post. 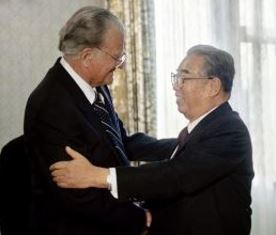 Billy Graham was an extremely humble man who could never understand why God chose him, —  a boy from a farm in North Carolina — to preach the Gospel to the world, yet he was weclomed by many world leaders including Queen Elizabeth and even Kim il-Sung. . As we had both been to North Korea, we would have long chats about whether Kim il-Sung had given his life to Christ after Billy had talked with him. Billy was even planning to go back to go fishing with Kim and told me, “I was going to challenge him out on the lake to give his life to Christ, but then he died and I didn’t go.” So we will never know, this side of heaven, what happened to the North Korea leader who had a Christian mother.

Some years ago, he showed me around his log-cabin home on the top of a mountain at Montreat, North Carolina, and I marveled how simple it was. No palace for this man, who has now left this earth, but is finally in a better place, but what a legacy that he has left behind.

Billy was devastated when he lost the love of his life, Ruth, in 2007, when passed away from pneumonia and degenerative osteoarthritis, but now he will has been reunited with her in heaven, and also the millions who found Christ because of his ministry.

Note: I am available to do interviews about my recollections of working with Billy Graham. Just call my cellphone at (714) 292 3114 or e-mail me at danjuma1@aol.com

About the writer: Dan Wooding, 77, is an award-winning author, broadcaster and journalist who was born in Nigeria of British missionary parents and is now living in Southern California with his wife Norma, to whom he has been married for nearly 55 years. They have two sons, Andrew and Peter, and six grandchildren who all live in the UK. He is the author of some 45 books and has two TV programs and one radio show in Southern California.

Uptick in Cyber Attacks since Military Strike against...