Charlotte, USA (ANS) – The Billy Graham Rapid Response Team (RRT) is serving in Louisiana, Mississippi, Tennessee and South Carolina alongside Samaritan’s Purse after a massive storm system swept across the Southeast United States Easter weekend. According to the BGEA the violent storms spawned dozens of tornadoes that killed at least 34 people and left many more injured. 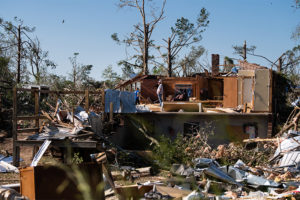 “As many communities are asked to stay at home, my heart breaks for families that now have nowhere to go—losing loved ones in a matter of minutes,” said Franklin Graham, president of the Billy Graham Evangelistic Association and Samaritan’s Purse. “Please join me in praying for God’s peace and comfort to cover them.”

More than 1.2 million people lost power from the intense storms, and hundreds of homes were damaged or destroyed due to the system’s side effects—twisters, large hail, high winds and flash flooding.

On Monday afternoon, the Rapid Response Team sent out two of its Mobile Ministry Centers—nicknamed “prayer trucks on wheels”—from the Billy Graham Library in Charlotte, North Carolina, to help setup deployments in Monroe, Louisiana, and Chattanooga, Tennessee. They now have teams of 6 to 8 chaplains offering emotional and spiritual care in those regions, as well as the devastated communities of Laurel, Mississippi, and Seneca, South Carolina. 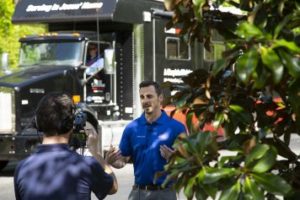 RRT’s Assistant Director Josh Holland during a Facebook Live standup. Behind him, a Mobile Ministry Center is geared up to head south.

“We’re going right into the heart of this disaster,” said Josh Holland, the RRT’s assistant director who commissioned the two vehicles with prayer on Facebook Live. “We pray that even people who have lost so much will realize there’s a God who loves them. That’s the hope that we have.”

Eleven fatalities were reported in Mississippi, where a pair of tornadoes just miles apart flattened homes and another tornado ripped through 100-plus miles of the state. That heartbreaking news is combined with the ongoing fight against COVID-19—a growing threat across the country.

The state of Louisiana was already grappling with a severe outbreak of more than 20,000 COVID-19 cases before being pounded by the storm. As the ministries head south, both the Rapid Response Team and Samaritan’s Purse will strictly adhere to federal and local guidelines as they talk with homeowners and repair houses in the tornadoes’ aftermath.

“I think even on these natural disaster deployments, what’s happened [with COVID-19] in the last month or so, has really sparked a new zeal, passion and urgency in these days to share the reason for the hope that we have with gentleness and respect,” Holland added.

For weeks, the teams have been working together to serve those facing the coronavirus at Samaritan’s Purse field hospitals in New York City’s Central Park and northern Italy, where they’re offering support to communities, medical staff and patients.

As thousands face a pandemic and natural disaster, it’s more important than ever to cling to the hope of Jesus Christ.

“In the Scriptures, Jesus makes it clear that in this world, trouble comes—but He always overcomes the world,” Holland said. “That’s the message of Easter. He overcame death out of the grave. Even in the most tragic events, in His time and in His way, He always redeems for His glory.”

Why Pastors Fall: The Cause and Cure