Top Posts
Knowing the One Who Always Keeps His Word
Pregnancy Resource Centers Fight For Life Amidst Opposition
This World is Not Our Home
Lessons Learned From a Gingerbread House
Let There Be Peace on Earth
‘I Wanna Dance’ movie: Whitney Houston’s success and...
Fact Finding, Sight Seeing, and Prayer Walking
Kidney donation led to 8 life-saving surgeries
The Power of Curiosity
When Love Came Down at Christmas
Home ANS Feature Tributes Pour in for Christian Resources Exhibition Founder

Known simply as ‘Gos’, the 87-year-old had heart surgery before Easter and returned home from hospital to recover but was re-admitted on Good Friday with complications and died shortly afterwards. 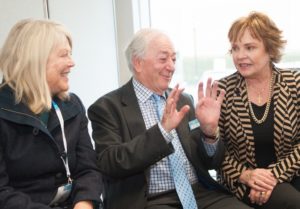 ‘Gos’ with his wife Diana and Irish singer Dana

His son, Olly, diocesan secretary of the diocese of Bristol said: ‘He was a man full of hope and love, always seeing life, potential and giving thanks in all circumstances. He achieved so much for so many. We’ll miss him so much and it is tough not to be together while we trust he is risen in glory.’

Theologian John Drane said: ‘Gos was a true Christian entrepreneur if ever there was one. He certainly made a difference to very many lives, including mine. May he rest in peace and rise in glory.’

Cindy Kent MBE said: ‘Gos was a great man who made such a contribution to Christianity in the UK. He was a real visionary. I was sad to hear this news.’

Singer Sandra Godley said: ‘We owe a rich depth of gratitude to a wonderful person.’

It was while recovering from a hip replacement operation many years before that Gos heard someone say ‘pick up and read’ – the same words given to St Augustine. But where Augustine picked up the Bible, Gos took hold of the UK Christian Handbook!

’It wasn’t the voice of God but Ernie Barnett, owner of a chain of Christian bookshops!’ recalled Gos. ‘Laid up for days on end, Ernie suggested I read the UK Christian Handbook. I did – from cover to cover. There were 5,000 entries spanning an unbelievable range of publishers, church suppliers, charities, architects, missions, newspapers, magazines, bookshops and much more. I realised there was no event where they could bring their products, services and ideas to the churches that needed to see them.’

Steve Goddard, owner of CRE, said: ‘I was privileged to attend the first exhibition in London in 1985, never dreaming I would one day own it. Gos had the heart of a lion and the tenacity of a terrier. But above all he was a gentleman in the true meaning of the term. He played a quiet but pivotal role in transforming the face of the UK church through CRE. Tens of thousands of people have benefitted from his vision.

‘Our thoughts and prayers are with his wife Diana and the whole Home family, especially at this time of enforced social isolation.’