“Join us in praying for all those facing devastating loss,” Franklin Graham, the president of the Billy Graham Evangelistic Association and Samaritan’s Purse, shared on Facebook. “So much can change in the matter of a few seconds as these tornadoes touch down.” 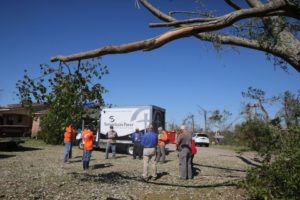 The Billy Graham Rapid Response Team (RRT) is ministering in the hardest-hit region of Onalaska, Texas. Located about 75 miles north of Houston, at least three people lost their lives and 20-plus were injured by “an extremely dangerous tornado,” according to the National Weather Service. The city faces heavy destruction in several neighborhoods with multi-level homes majorly damaged or destroyed.

Partnering with Samaritan’s Purse, the team recently deployed dozens of chaplains throughout the Southeast in Louisiana, Mississippi, Tennessee and South Carolina after an intense storm system killed 36 people during Easter weekend. These crisis-trained chaplains have been offering emotional and spiritual care to affected residents while Samaritan’s Purse volunteers repair homes.

In addition, Rapid Response Team chaplains have prayed with more than 1,400 people near Samaritan’s Purse field hospitals battling COVID-19 in New York City and northern Italy. As tornado season collides with the coronavirus crisis, both the Rapid Response Team and Samaritan’s Purse have been taking precautions in alignment with CDC guidelines to offer communities comfort and hope amid disaster.

This Pastor Answers The Question ‘How Do I...