Top Posts
Colorado football coach Sanders’ unabashed faith
There’s A Light That Enters Houses With No...
Knowing the One Who Always Keeps His Word
Pregnancy Resource Centers Fight For Life Amidst Opposition
This World is Not Our Home
Lessons Learned From a Gingerbread House
Let There Be Peace on Earth
‘I Wanna Dance’ movie: Whitney Houston’s success and...
Fact Finding, Sight Seeing, and Prayer Walking
Kidney donation led to 8 life-saving surgeries
Home ANS Reports Convoy of Hope Distributes 10 Million Meals During Pandemic 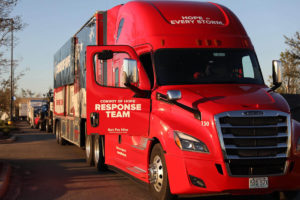 Murrieta, California (ANS) – During this time of pandemic and unemployment, Convoy of Hope reports an uptick in donations for those in most need. Convoy of Hope announced that businesses, churches, and Individuals have stepped up their giving for those hardest hit by this crisis.

SPRINGFIELD, MO – Convoy of Hope has distributed more than 10 million meals to hundreds of hard-hit communities across the nation, in response to the COVID-19 pandemic. The organization’s fleet of tractor-trailers has been crisscrossing the United States for the last five weeks. They deliver emergency supplies and food, with no plans of slowing down any time soon.

According to Donaldson, the generosity of corporations, churches, and individuals has enabled many families to receive much-needed assistance.

“This is a united act of compassion.  Groups and businesses are more concerned about helping people than they are receiving credit. We’re seeing compassion in action on a large scale,” he said.

Kindness is a medicine that Americans need right now. It is being given out across the nation.”

About Convoy of Hope

Convoy of Hope is a faith-based organization with a driving passion to feed the world. They have a long history as an early responder in times of natural disasters.  Convoy of Hope is a Four-Star Charity recognized by Charity Navigator for 17 consecutive years. Convoy of Hope has served more than 130 million people since it was founded in 1994. Also, Hal Donaldson, the president of Convoy of Hope, has authored more than 30 books. They include Disruptive Compassion: Becoming the Revolutionary You Were Born to Be and Your Next 24 Hours: One Day of Kindness Can Change Everything.  Donaldson has a bachelor’s in journalism from San Jose State University and a bachelor’s in biblical studies from Bethany University. He and his wife, Doree, have four daughters.  Visit convoyofhope.org to donate to their response.