Top Posts
Colorado football coach Sanders’ unabashed faith
There’s A Light That Enters Houses With No...
Knowing the One Who Always Keeps His Word
Pregnancy Resource Centers Fight For Life Amidst Opposition
This World is Not Our Home
Lessons Learned From a Gingerbread House
Let There Be Peace on Earth
‘I Wanna Dance’ movie: Whitney Houston’s success and...
Fact Finding, Sight Seeing, and Prayer Walking
Kidney donation led to 8 life-saving surgeries
Home ANS Feature Cuban Lawyer and Journalist Released

Guantanamo, Cuba (ANS) – According to CSW, Roberto Quiñones Haces, a Cuban journalist and lawyer, was released from prison in Guantánamo, Cuba, on 4 September after spending nearly a year in prison for his work reporting on the trial of Cuban pastors Ramón Rigal and Adya Expósito Leyva.

With Mr Quiñones Haces’s release confirmed, CSW can now report that Ramón Rigal was also released from prison earlier this year in June. Both Ramón and Adya were imprisoned for removing their children from the state-run school system due to teacher-led bullying. The news could not be shared until Mr Quiñones Haces’s release due to concerns about repercussions in his case. 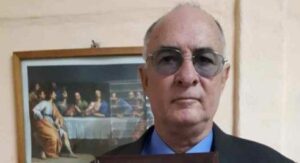 Mr Quiñones Haces, 63, was imprisoned on 11 September 2019 on charges of ‘disobedience’ and ‘resistance’ because of his work as an independent journalist. During his imprisonment, numerous international human rights organisations, including Article 19, the Institute for War and Peace Reporting (IWPR) and Amnesty International, called for his release.

He was reportedly targeted in order to prevent him from covering the trial of Cuban pastors Ramón Rigal and Adya Expósito Leyva. The couple, both residents of Guantánamo City, received prison sentences in April 2019 after they chose to remove their children from the government-run school system because of their concerns about teacher-led bullying of their children due to their religious beliefs, and the uncompromising secularist curriculum.

CSW’s Founder President Mervyn Thomas said: “While CSW welcomes the release of Roberto Quiñones Haces, and pastors Ramón Rigal and Adya Expósito Leyva, they should never have been imprisoned. The situation for human rights in Cuba remains highly concerning and we call on the government of Cuba to ensure full respect for all human rights, including the right to freedom of religion or belief and freedom of expression. We continue to call for the release of all remaining prisoners of conscience, who must be permitted to enjoy their freedom without fear of further harassment or arrest.”