Top Posts
Knowing the One Who Always Keeps His Word
Pregnancy Resource Centers Fight For Life Amidst Opposition
This World is Not Our Home
Lessons Learned From a Gingerbread House
Let There Be Peace on Earth
‘I Wanna Dance’ movie: Whitney Houston’s success and...
Fact Finding, Sight Seeing, and Prayer Walking
Kidney donation led to 8 life-saving surgeries
The Power of Curiosity
When Love Came Down at Christmas
Home ANS Feature Dan Wooding shares his “Twenty-Six Lead Soldiers”

The name comes from Karl Marx who once said, “Give me Twenty-Six Lead Soldiers and I’ll conquer the world.” He was talking about the alphabet and the lead soldiers were from the days of hot metal printing. 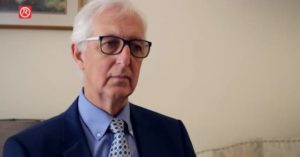 Dan says that he has been using his Twenty-Six Lead Soldiers for more than 50 years for good, while Karl Marx used his for evil.”

In the interview, found at http://revelationtv.com/programme/27342379 , Dan shares the many stories of his worldwide travels, including his time in North Korea, and how a possible Hollywood movie is now in the works with the working title of “Twenty-Six Lead Soldiers” and the screenplay has been written by Claire Hutchinson and Dan is represented by Hollywood agent, Terry Porter.

Dan now lives in North Wales, UK, with Norma, his wife of 56 years, and has been dealing with several serious health problems, including lung cancer, which has now cleared up after surgery.

Gordon Pettie, the host, is based in Spain, and flew over to do the interview. He and his wife were students at the Birmingham Bible Institute and she would often join Dan and Norman Wooding pnm their outreach team from the Sparkbrook Mission on a Saturday night to take the Gospel to the pubs and coffee bars in that part of Birmingham, England.