Top Posts
Knowing the One Who Always Keeps His Word
Pregnancy Resource Centers Fight For Life Amidst Opposition
This World is Not Our Home
Lessons Learned From a Gingerbread House
Let There Be Peace on Earth
‘I Wanna Dance’ movie: Whitney Houston’s success and...
Fact Finding, Sight Seeing, and Prayer Walking
Kidney donation led to 8 life-saving surgeries
The Power of Curiosity
When Love Came Down at Christmas
Home ANS Feature Former Senator Urges Formal Apology to Native Americans, Reconciliation 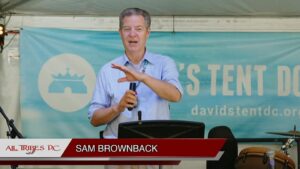 The United States Ambassador-at-Large for International Religious Freedom under President Donald J. Trump told Native Americans in Washington, D.C. for worship and prayer that it is time for the current president to formally apologize to them.

Sam Brownback, a former U.S. Senator from Kansas and the state’s one-time governor, read an apology to Native Americans for the first time in the nation’s capital, inviting fourth-generation pastor and evangelist Dr. Negiel Bigpond to stand beside him.

Bigpond, a full-blood Euchee/Yuchi Native American whose family traveled the Trail of Tears, joined Brownback and other indigenous Christians in writing the apology signed in a defense appropriations bill on Dec. 19, 2009 – but never publicized – by President Barak Obama.

Brownback, speaking on the National Mall at a gathering of All Tribes D.C., said the time is right for a formal apology to Native Americans, and for reconciliation among all people groups. 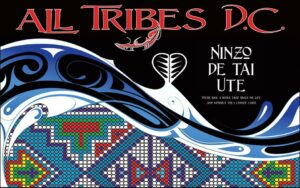 “I propose Thanksgiving week this year be a week of reconciliation between Native Americans and all other U.S. citizens. Let us reconcile and move forward together as brothers and sisters. Let us heal the land. Let us open a highway of reconciliation that has been overgrown with the brush of neglect,” Brownback said.

In addition to praying together in D.C., Brownback and Bigpond are featured in a documentary (THE APOLOGY (theapologynow.com), which highlights their 20-year friendship and collaboration on the little-known legislation passed by Congress 12 years ago.

The documentary also showcases Bigpond and Native Americans extending forgiveness at a prayer gathering around the Washington Monument.

“I believe today is really a big day,” said Brownback who prayed, “Let it be, Lord.”

Walking from his son-in-law and daughter’s home past the National Museum of the American Indian to the National Mall, Brownback reminisced with Christians gathered inside David’s Tent DC ((7) Facebook) for  prayer and worship.

“I remembered how many times I had jogged down there, praying for reconciliation with the native people,” Brownback said. “My sense is that that journey of reconciliation really takes a big leap forward today,” he added.

After the apology legislation was signed in 2009 by Obama, who didn’t say anything about the new law, Brownback had given up.

“Negiel (Bigpond) didn’t quit,” Brownback said of his friend and brother in Christ. “That’s why two are better than one,” Brownback said referring to Ecclesiastes 4:9-12. “When one falls down, the other can pick him up. And Negiel started carrying me,” he said. 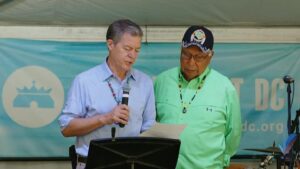 Wearing a native-style necklace from a late American Indian Christian leader, Dr. Jay Swallow, Brownback thanked Joann Swallow for the couple’s inspiration in helping to write the apology that became the law (The Apology: The Law — THE APOLOGY (theapologynow.com),  and for her husband’s prayer reconciliation work in western Kansas.

“I want to tell you two quick things that reconciliation brings,” Brownback said. “When I was governor, we had a Native American Day at the state capitol. The native children were dancing. And one of the native ladies came to me and said, ‘I don’t think I’ve ever seen this happen. The children dancing in the state capitol.’

“Their joy is what I felt here when we were worshipping today. This is what it’s going to look like in the Kingdom of God on a full-time basis. It’s going to be natives and whites and blacks and all tribes bringing their joy together to the Lord,” Brownback said.

From a farming family, Brownback said water is a precious commodity in Kansas and, through the Swallows’ focused prayer against a stronghold of greed, its power was broken.

It wasn’t that we hated the natives. We wanted the land,” Brownback said.

The Ogallala Aquifer is the lifeblood of agriculture and the cattle industry in western Kansas, the biggest agricultural congressional district in the country.

Today, thanks to prayer the aquifer is sustainable. “After Jay (Swallow) came through and prayed for reconciliation and broke the greed ethic, there are now a lot places over the Ogallala Aquifer that are used sustainably,” Brownback said.

“That’s what reconciliation and forgiveness can bring you – healing of the land in a physical, tangible way.”

A strong believer, Brownback said America has a spiritual problem. “We’re unreconciled. Until we go through this process, we can’t go to native people and African Americans – I might mention, too – and ask ‘what must we do that you would bless us?’ Brownback said.

It’s the question that King David asked of the Gibeonites. “What must we do that you would bless us? So that the land is blessed, not cursed,” Brownback said.

He then quoted Saint Augustine who said confession of bad works is the beginning of good works. “We confess a bad work today. We confess that, as a government, the United States of America broke treaties with Native Americans, didn’t even recognize them as people – as fellow human beings – until 1990.

“We moved Native Americans from their ancestral homelands in the Indian Removal Act at a great cost of lives,” Brownback said.

In fact, Native Americans were recognized as people through the Standing Bear case, which began in 1879.

Brownback pointed out that his friend and All Tribes D.C. leader, Dr. Bigpond, was forced by the government into a residential school for Native American children.

“We tried to eliminate their culture through boarding schools like the ones that Negiel (Bigpond) experienced. We spilled innocent native blood. We did this and more because we wanted the land.

“It didn’t have to be this way. We could have dealt with Native Americans as brothers and sisters created like us in the image of God.

“We confess our sins and ask for forgiveness. We seek to move from bad works to good works. Let the good works begin, and begin today,” Brownback concluded.