Top Posts
Knowing the One Who Always Keeps His Word
Pregnancy Resource Centers Fight For Life Amidst Opposition
This World is Not Our Home
Lessons Learned From a Gingerbread House
Let There Be Peace on Earth
‘I Wanna Dance’ movie: Whitney Houston’s success and...
Fact Finding, Sight Seeing, and Prayer Walking
Kidney donation led to 8 life-saving surgeries
The Power of Curiosity
When Love Came Down at Christmas
Home ANS Feature Former UK pro footballer who became a homeless drug addict credits God for restoring his life 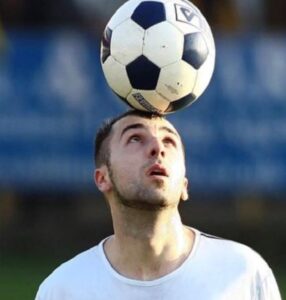 “I lost everything, but as I look back now I know that needed it to happen for me to turn to Jesus,” explains Tyrone aged 37.

At the age of just 16 Tyrone had it all, when he became World Freestyle Football Champion.

As a result of this victory he was living the dream, enjoying lucrative freestyle football promotional tours with Nike around the world.

But while in his early 20s as he sought to re-establish his football career his father passed away.  This trauma in his life tipped him over the edge, which led to a self-destructive addiction to crack cocaine.  He lost everything including contact with his three children and he was even homeless for two years and eventually went to prison.

But the turning point in his life came when he went to a Christian run drug rehabilitation centre called Teen Challenge.  He strongly believes his new-found Christian faith while there helped him to finally get clean from drugs and got him on the path to getting his life back again.

Since then he’s dedicated his life to helping others where he now lives in Bridlington in the North of England and shares his own dramatic story to inspire others:

“Up until recently I worked with Grace Church helping others which was brilliant, feeding the homeless and clothing them but more importantly supporting them in every way we possibly could. Through that I have made a lot of friends and every day I interact with the homeless in my area or people who suffer with mental health issues and have no one, to let them know someone does care about them.

“I started producing online videos through a Christian charity. It is a fantastic way of inspiring people. I was also asked to start speaking and teaching the Bible which I really love doing.”

Tyrone says he was blown away by the response to one of the videos he’s produced which has started to go viral:

“To be honest the impact has blown my mind. I have people contacting me from all over the world and mainly this was down to me being asked to do a video for Oh My Goal magazine on Facebook and their YouTube channel which has millions of followers. I thought it was an opportunity to praise God for saving me. I wanted to show people no matter how lost you get, hold on, suicide is not the answer and sometimes it’s only in the darkness you look for the light and for me that was Jesus.

“I share my story of how bad it got, being put in prison, being put in the national newspapers, humiliated and lost everything that mattered especially my three beautiful kids.  I was homeless without hope until I went to Teen Challenge rehab and God has turned my mess into a message and if it helps just one person lost in addiction, depression then it’s worth it.”