Top Posts
Colorado football coach Sanders’ unabashed faith
There’s A Light That Enters Houses With No...
Knowing the One Who Always Keeps His Word
Pregnancy Resource Centers Fight For Life Amidst Opposition
This World is Not Our Home
Lessons Learned From a Gingerbread House
Let There Be Peace on Earth
‘I Wanna Dance’ movie: Whitney Houston’s success and...
Fact Finding, Sight Seeing, and Prayer Walking
Kidney donation led to 8 life-saving surgeries
Home ANS ReportsCulture Greek Crosses in the Life of Artist, Max Cole 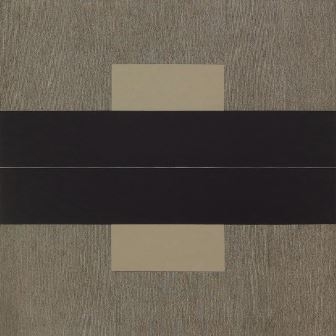 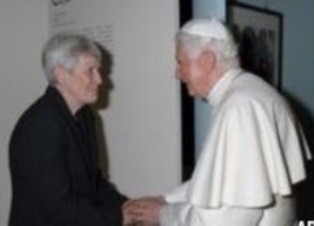 SANTA FE, NEW MEXICO (ANS April 8, 2018)—The first thing I said to artist Max Cole is that I like her lines. Any other woman may have taken offense. But not Ms. Cole. She knew exactly what I was referring—her art. The eighty-one year old, with piercing blue eyes, grabbed my hand, smiled, and said, “Thank you so very much.” And over the next twenty minutes Max gave me a sweeping overview of her life and work.

Born in 1937 in Kansas—but now living in California, Cole is considered one of the greatest living minimalist artists on the planet. Her work has been featured in most major museums across the globe. She’s met with both Popes and Premiers. But from her perspective, she’s nothing more than a “hermit seeking transcendence thorough art.”

After graduating from the University of Arizona in 1964, Cole moved to the Los Angels area where she developed as an artist in the burgeoning California art scene. In 1978 she moved to New York where she lived until 2002, then the Catskill Mountains until 2011. Her most recent move brought her back to California, living, she says, “Where I can walk all day without seeing a car or a person.”

In the midst of all these moves, she’s exhibited around the world and exudes a life of a pure artist—fixed, firm, and focused on her work, taking little note of the ever-changing fads in contemporary art. With her vertical, horizontal, and diagonal lines painted in beautiful, finely rendered strokes, Max encompasses the deep intellectual and spiritual values of an artist. For those of us who appreciate minimalist art, she’s a living legend. 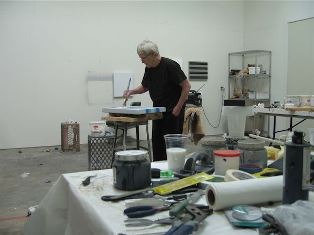 I was pleased to have met Max at the opening of her exhibit The Long View, held at the Charlotte Jackson Fine Art Gallery in Santa Fe, New Mexico.

Before I talked with Cole, I touched base with Charlotte, a friend and fellow admirer of contemporary art. After thanking her for the exhibit, Charlotte said, “Brian, you’re not going to believe this. Max rented a U-Haul, packed her paintings, and drove to Santa Fe from Northern California.” I asked, all by herself? Charlotte replied, “Yep, all by herself. She’s that type of woman. She even chops her own wood.” Even before meeting Max I was impressed.

After my opening statement about her lines—I asked Max about the inspiration of the new exhibit—Greek crosses.

What enticed you to Suprematism, I ask. “I was attracted to its mysticism, allowing for a spiritual and intellectual quality to come through. Kazimir was able to reduce objects to their essential forms, a modern icon, of sorts.”

Were you brought up in a religious family, I ask. “Yes. I attended church as a child. This is something my father stressed. I went to many churches. But as influential was the deep spirituality of my grandfather. He was half Native American and had an abiding love for nature. I’d say I’m religious, but not necessarily traditional in my beliefs.”

So if the transcendental qualities in art appealed to you—particularly the work of Malevich, why the crosses, I continue. “The Greek cross has both an intellectual and spiritual quality to it, as well as an abstract property. I believe one must approach art with humility, and the cross represents that. And more so, I don’t use much color in my art, shades of blacks, grays, whites, and browns. For me, color conveys great emotion. And I don’t want my ego—my emotions—to get in the way. Emotions aren’t as significant as spirituality. And it’s spirituality that I seek, a universal approach to art and life.”

Speaking of spirituality, you met with Pope Benedict in 2009, is that correct? “Yes. Pope Benedict invited several artists to visit with him in Italy. I was very impressed with him. He has a profound love of art and beauty. After shaking his hand, I said something like ‘Thank you for embracing the spirit of art and the artist.’ I think we believe a similar thing: there is something greater than ourselves, and our role is to seek transcendence. Benedict recognized art as a spiritual experience. Something I share.”

Were you the only artist, I ask? “Oh, no. There were many others—painters, filmmakers, and poets. I was invited by the Vatican to exhibit my work. Mr. Giuseppe Panza, an Italian art aficionado, collected my work. Panza died in 2010, but was instrumental in connecting me to a broader audience in Italy, including the Pope. The whole experience was quite a treat.” 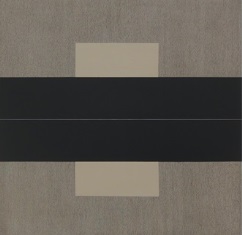 Over the past few years your work has been exhibited in several churches, correct? “Yes. I’ve been fortunate to exhibit in a Cathedral in Milan as well as Cologne, Germany. My exhibit in Milan was in juxtaposition with ancient cruciform pieces. And in Cologne, I did a one-person show at the Cologne Cathedral.   I’ve had an enduring relationship with people in Germany, traveling back and forth often. A book, To the Line, was published in Germany, showing my work in the church, in addition to catalogs, articles, and brochure’s.”

After more discussion about her lines—precise and pristine, someone asks how they are made. Cole’s reply: “I just work hard at it.” I sense other people wanting to talk with Max. But before I leave her, she runs to the back and gives me a catalog of her work alongside the book she referenced. She’s then swept away by other admirers.

I turn my attention back to Charlotte. Charlotte walks me over to one Cole’s Greek Cross paintings, pointing out the intricate brush strokes, noting that this shows the “artist’s hand at work.” Charlotte tells me that Cole builds her surface with layers of paint, creating a relief-type surface. I study the lines and exacting work in deep appreciation, mumbling that I’ve spent years trying to create lines and edges like this in my artwork, but nothing this meticulous. I was especially impressed with three black images of the Greek Crosses. One in particular, Greek Cross XXIII, 2016 acrylic on canvas, caught my fancy.

To augment what she’s saying, Jackson has her assistant bring me a short article written by Michaelea Kahn. I open the folder and read, “In 2015 – one hundred years after Malevich’s painting of the Greek Cross, Max Cole was invited to participate in a portfolio of prints honoring Malevich’s Black Square. Cole made a print based on Malevich’s Greek Cross, which had inspired her and served as a leaping off point for her own work back when she was an art student. It felt like a natural step to return to her beginnings and revisit the form – honoring both his work, and coming full circle with her own.

“Geometrically, the Greek Cross is a square cut into thirds both horizontally and vertically – creating a perfect equilibrium of form. Each of Cole’s paintings is on a square format. The cross form is sometimes quite clear – for example, a bold black form bisecting the canvas vertically and horizontally. In other instances, however, the form is only implied – black blocks hovering above and below a gray band, bands of black ghosting beneath an over-layer of white. In addition to Cole’s signature use of minute, intricate hand-drawn vertical lines, she also uses areas of thick paint with various surface textures. These layered areas work architecturally to create additional lines of light and shadows across the canvas. 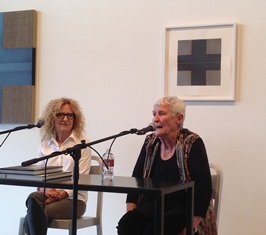 “Cole’s work, though based on the geometry of the Greek Cross and Malevich’s original, upsets the inherent equilibrium of the form by gently distorting its perfect symmetry, creating tension. As with Cole’s horizontal band pieces, the strain between vertical and horizontal are here resolved in an intuitive and visceral balancing of tensions rather than in a perfecting of the form itself…

“Each piece, with its delicate balance and aura of calm focus, works its slow magic upon the viewer: Drawing in, reaching out. Quieting the mind until the viewer is able to breathe in the rhythm of the painting, to feel the essence, the solitude and poise, that exists behind each brushstroke.”

Kahn’s words foster a deeper appreciation for Cole’s work, drawing me in with greater enthusiasm. True, I could have stayed all night staring at the work, but, luckily, The Long View will remain on exhibit until May 6th, providing more time for richer reflection. And Max Cole will return to Santa Fe at the end of April, speaking to museum groups on April 26th and 27th.

It may have been Cole’s lines that first caught my attention, but after meeting her I can say unequivocally that it’s her life that is the work of art. 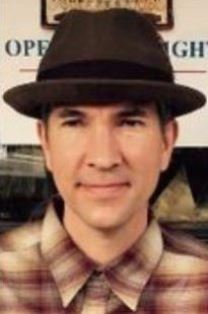