Top Posts
Knowing the One Who Always Keeps His Word
Pregnancy Resource Centers Fight For Life Amidst Opposition
This World is Not Our Home
Lessons Learned From a Gingerbread House
Let There Be Peace on Earth
‘I Wanna Dance’ movie: Whitney Houston’s success and...
Fact Finding, Sight Seeing, and Prayer Walking
Kidney donation led to 8 life-saving surgeries
The Power of Curiosity
When Love Came Down at Christmas
Home ANS Reports ‘I Am Second’ Sequel Catches Up with Moriah Peters after Marriage to King and Country Singer

NASHVILLE, TENNESSEE (ANS) — When Moriah Peters first sat in the I Am Second white chair to make her short film in 2013, she was a newly engaged 20-year-old singer sharing her challenging experience of being rejected from American Idol auditions because of her faith. 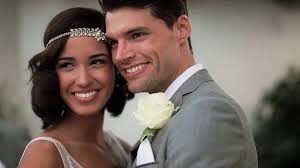 Moriah Peters and Joel Smallbone at their wedding

Now, according to a media release, Moriah — a successful Christian artist and wife — joins her husband Joel Smallbone of the band for King and Country to share about the joys, struggles and lessons in learning to love wholeheartedly in a new Second Edition short film from I Am Second.

Moriah recounts her comical interpretation of seeing well-known pop artist Joel Smallbone of for King & Country. When she finally meets him, she says “it was love at first sight – for him.”

Joel joined the set partway through Moriah’s version of the story to share his side of their journey.

“I will never forget turning around and seeing her for the first time. I was a bit of a bumbling idiot for the rest of the night,” said Joel. “I knew I had to figure out who this woman is and get to know her.”

Joel persuaded Moriah to write a song with him, which created a depth of friendship and companionship. But despite her sincere affection for Joel, Moriah did not feel prepared to fully open her heart to her husband. For two and a half years, she struggled to be vulnerable.

“I was very guarded and most of that was coming from a place of fear,” said Moriah.

As Moriah learned to open up and give access to her heart, she discovered the power of putting God at the center of her relationship.

“You put two imperfect people together, and you’re asking them to protect one another’s hearts and to love one another unconditionally,” Moriah said. “The only way to do that is by accessing and tapping into a love that’s bigger than us.”

In the Second Edition film, Moriah and Joel transparently share about the joys and struggles of learning to love and find balance in their busy lives as musical artists.

I Am Second is a non-profit launched in 2008 that ignites hope and inspires people to live for God and for others. Its website, www.iamsecond.com , features written and film-based stories of more than 100 athletes, actors, models, musicians, cultural influencers and everyday people who have stepped in front of the camera and declared, “I Am Second.” For information, visit www.iamsecond.com.