Top Posts
When Love Came Down at Christmas
A Walk of Faith Begins with a Step...
God is Rich in Mercy
Everyone has a Story to Share
‘Till’ movie: Racial murder helped spark civil rights...
Leaning His Head On Jesus, This Evangelist Hears...
Timing, common ground, and fruitfulness in witness
Step Out of the Traffic
In Support of Ukraine
Living an Imperfect, Unfinished Life
Home ANS Feature John MacArthur Urges Pastors to Reopen Churches 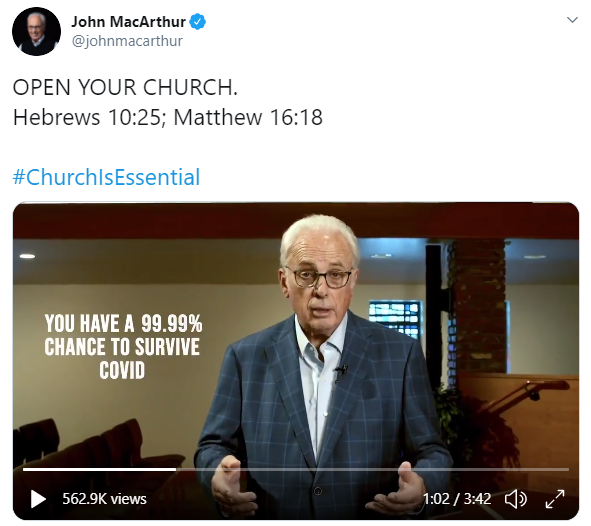 Pastor John MacArthur of Grace Community Church in Los Angeles, California is calling pastors and church leaders across America to reopen their churches despite COVID-19 restrictions by “leftist and secular government officials” who seek to “shut us down.”

According to The Blaze, MacArthur released the video on his official Twitter account on Wednesday, which has since gone viral with over 550,000 views.

“Today’s current crop of politicians are trampling on the Constitution and on the resolve of citizens to demand their rights under the pressure of a manufactured fear,” MacArthur said in the video. “The reality is that the COVID data just doesn’t match the government’s COVID narrative.”

MacArthur, who is in the midst of an ongoing legal battle with California officials for holding church services amid coronavirus restrictions, claimed that people have a high rate of surviving the disease.

“You have a 99.99 percent chance to survive COVID,” the California pastor claimed. “It’s just not what they’re saying it is.”

“That absolutely does not warrant shutting down anything,” he continued. “But especially, absurdly, and arbitrarily, churches that have a special protection from the Constitution. Oh, and at the same time, leaving open abortion clinics, strip clubs, and marijuana dispensaries.”

MacArthur noted that a double standard has been evident among the Health Department who have kept churches shut while allowing protests and riots to continue “without regard for the mandated health and safety ordinances.”

“This is obviously targeted discrimination,” he added. “Leftists and secular government officials have no tolerance for biblical Christianity, so they’re using COVID as an excuse to shut us down.”

MacArthur further explained that he had initially followed the restrictions when the virus first hit the state, but Grace Community Church members gradually returned on their own because “they didn’t believe the narrative the local government and media were giving them.”

Towards the end of the video, the octogenarian pastor stressed the Constitution’s defense of religious freedom and the biblical mandate for the church to meet.

“This is a time of all times to meet as the church. Open your church. The church is essential.” he concluded.

The “Church is Essential” petition was released by the Falkirk Center in addition to MacArthur’s video.