Top Posts
Knowing the One Who Always Keeps His Word
Pregnancy Resource Centers Fight For Life Amidst Opposition
This World is Not Our Home
Lessons Learned From a Gingerbread House
Let There Be Peace on Earth
‘I Wanna Dance’ movie: Whitney Houston’s success and...
Fact Finding, Sight Seeing, and Prayer Walking
Kidney donation led to 8 life-saving surgeries
The Power of Curiosity
When Love Came Down at Christmas
Home ANS Feature U.S. Drives Stake in the Ground to Advance Religious Freedom

U.S. Drives Stake in the Ground to Advance Religious Freedom 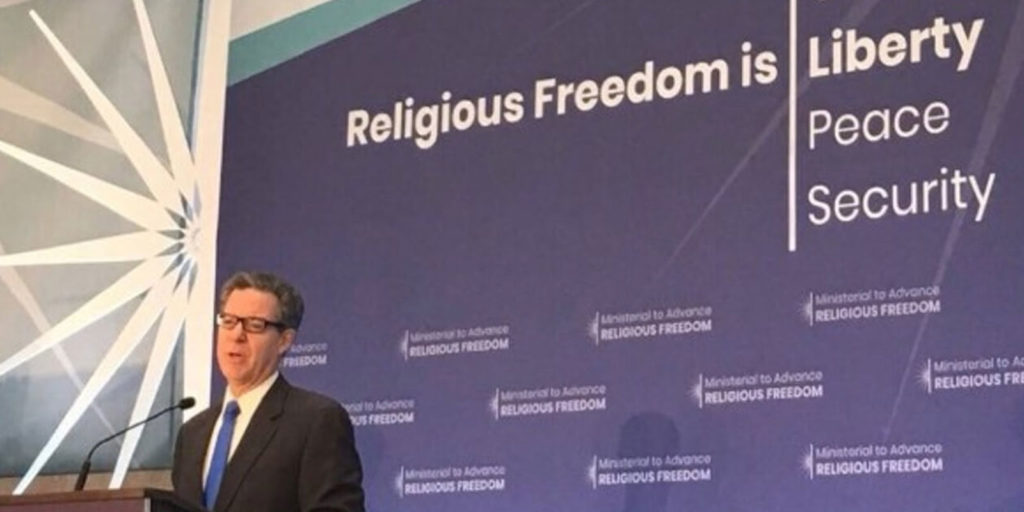 By Dominic Sputo of Lumenlife – I would like to begin to unpack the significance of last week’s unprecedented Ministerial to Advance Religious Freedom by the U.S. State Department.

First, I want to reiterate the importance of this meeting. The three days provided a much needed international spotlight on the persecuted and have the potential to globally impact those who suffer silently for their faith.

It was also a message to the world, that going forward the State Department will emphasize religious freedom in its approach to foreign policy.

It is a brilliant strategy, as it is well documented that countries that foster environments with religious freedom have greater levels of economic and social prosperity, productivity, and stability, and lower levels of threats, terror and persecution. Ultimately, the world is going to be a better place if we promote…and enforce religious freedom.

Promoting The Value of Religious Freedom

Allow me to provide some background: While this meeting was the first of its kind, the concern for a global commitment to human rights is not. In 1948, the United Nations established the Universal Declaration of Human Rights, and specifically addressed religious freedom in article 18. Forty-eight countries signed the declaration agreeing to abide by it and respect the religious rights of its people. Seventy years later, however, signatories of that document; countries like Burma (Myanmar), China, Cuba, India, Iran and Pakistan, are among the worst perpetrators and egregious offenders of human rights in the world. And they have largely gone without repercussion.

This Ministerial was the U.S. putting a stake in the ground, saying ‘enough is enough’ and leading the charge to begin to do the right thing.

It is so refreshing to finally have an administration with a genuine concern for the persecuted and a resolve to stand up to the hypocrisy of these nations.

In addition to holding nations accountable, the U.S. pledged to help rebuild the many communities destroyed by ISIS (particularly in Iraq) and make more money available to private organizations that are advocating for and helping victims of religious persecution, among others.

I’m not naive enough to think that things will begin to change overnight. But, Secretary of State Mike Pompeo did commit to making this an annual event, and other countries around the world are going to host similar meetings.  I’m encouraged that the U.S. is taking the lead and rallying other like-minded countries to do the same.

I feel like it was a miracle that I had the privilege to attend this landmark event and join others who feel as passionately about the persecuted as we do at LumenLife. In my next blog, I will explore the impact this Ministerial could have on LumenLife and how you can get involved.